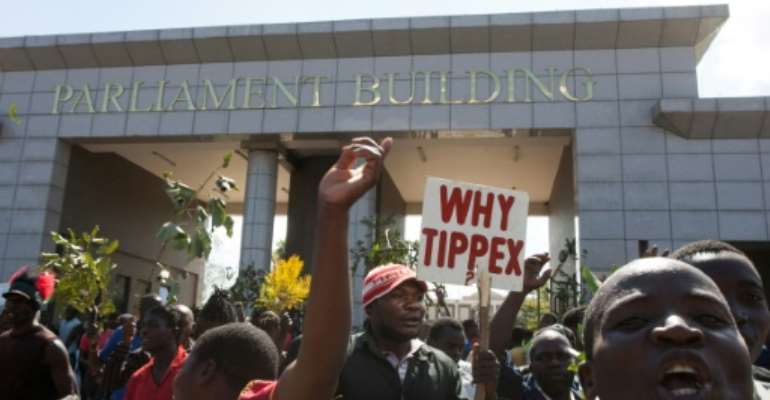 The election was marred by allegations of fraud, including that results were altered using typewriter correction fluid. Protests have broken out sporadically since the result. By AMOS GUMULIRA (AFP)

Malawi government supporters on Wednesday clashed violently with opposition groups protesting the result of presidential elections in May.

The skirmish erupted in the commercial capital Blantyre, where hundreds of people were marching to demand the resignation of Malawi's electoral commission chairwoman.

MacDonald Sembereka, who heads the coalition that organised the protest, told AFP that President Peter Mutharika's sympathisers confronted marchers along the way.

"We were ambushed and stoned by (ruling Democratic Progressive Party) DPP supporters... alongside the route of the march," said Sembereka, adding that several people were injured.

An AFP reporter at the scene said DPP supporters hurled stones at anti-government protesters. They attempted to fight back until police fired tear gas to disperse the crowd.

Mutharika narrowly secured a second five-year term in the May 21 ballot with 38.57 % of the vote.

Runner-up Lazarus Chakwera alleged he was robbed of victory in the ballot, which he lost by just 159,000 votes.

The election was marred by allegations of fraud, including that many results papers were altered using typewriter correction fluid.

Country-wide protests have broken out sporadically since the result.

Sembereka told AFP protest leader Billy Mayaya was badly wounded after he was singled out and assaulted by ruling party cadres.

He said police chased protesters who had followed their leader to a nearby hospital. They continued to fire tear gas inside and arrested people who had sought shelter on the wards.

"The police were actually firing teargas at people at the hospital," said Sembereka. "We have lost one child."

Neither police nor hospital authorities were immediately available to confirm the child's death.

Sembereka condemned the violence as a "perpetuation of impunity" granted to DPP supporters.

"We will not condone that," he added.