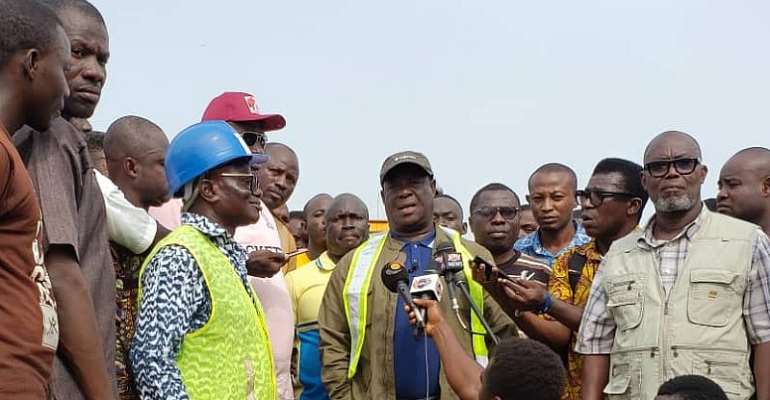 The Minister of Roads and Highways, Kwasi Amoaku-Atta has given the Ghana Highways Authority a 48-hour ultimatum to fix portion of the Wa-Tumu-Bolgatanga road that has been washed off by a downpour at Dimajan in the Sissala East Municipality of the Upper West Region.

The Minister gave the directive when he paid an emergency visit to the site.

“This is a national problem and we want to attach serious importance to it to get it resolved. I want to assure residents of these two regions, that is the Upper West and Upper East regions that the government of his Excellency the President attaches great importance to the road sector and whatever happens, even if it's by an act of God like this one, we will marshal all the resources available to us, both human and material to get it fixed. I want to charge you, the Chief Executive of the Ghana Highway Authority to get your men to work day and night to make sure this problem is addressed in the next two days,” he directed.

Mr. Kwasi Amoaku-Atta, his Deputy, Anthony Abaefaa Kaabo and officials of the Ghana Highways Authority led by their acting Chief Executive officer, Nicolas D. Brown, visited the scene to have first-hand information on the extent of damage on the road and its impact on the travelling public.

The Dimajan portion of the Wa-Tumu-Bolgatanga road got washed since last Thursday, causing inconvenience to an estimated number of over two thousand road users.

The road is among the many road

is among the many road projects in the Upper West region that have been awarded but abandoned by contractors due to lack of funds.

The minister however disclosed that there will be major payments to contractors in the next two weeks to give a facelift to road projects in the country.

“I can tell you that since January 2017, payments to contractors have not stopped. We have paid over five billion to contractors. In the next two weeks, there is going to be a major payment to all contractors over the country.”

The Deputy Upper West Regional Minister, Issahaku Amidu Chinia bemoaned the deplorable nature of roads in the region and appealed to the minister to prioritize payments to contractors in the region.

Meanwhile the Upper West regional director of the Ghana Highways Authority, Eng. T K Oppong Baah assured the minister that his men will work around the clock to meet the 48hour deadline to alleviate the plight of the travelling public on the road.