‘Covert And Overt Operations’ 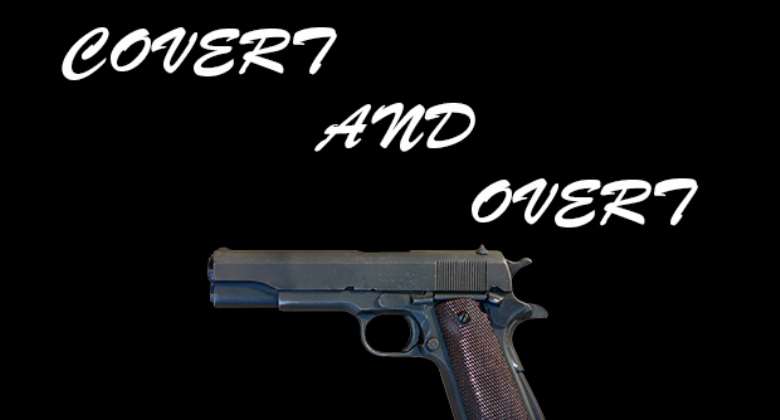 The aforementioned headline is intended to remind us about the leaked audio from an opposition NDC meeting.

What is the difference between the 'destabilization project ahead of the 2020 election' theme of the said clandestine meeting and the stockpiling of weapons and Improvised Explosive Devices (IEDs)?

Some cynics have sought to pour cold water over news about the production of IEDs and the pile-up of firearms both in a container within a health facility in Accra and elsewhere.

Of course, it is face-saving to do so because the Alajo bomb doctor's story is an extension of their narrative part of a jigsaw. Incite the people against the democratically elected government as you prepare to inflict maximum casualties both means of destabilizing the country.

The Alajo doctor and his accomplices were not stockpiling the arms because they want to use them to go antelope-hunting. These are killer gadgets intended to throw the country into turmoil.

We know them who have been consistent with their nonsense about the imminence of a coup because for them we are in a failed state. Now we understand why they have been so noisy about referring to the country as being under its worst state since independence. Having thus prepared the grounds for an insurrection, the Alajo bomb doctor's angle IEDs et al would be activated and bam!!

The security agents would not sit down and be blamed later for slumbering on duty. The national security apparatus under their able appointees have coordinated well with the officers and men in uniform and the intelligence community to foil what could have been a source of destabilization of a peaceful country.

We refuse to accept the uninformed crap that those weapons and IEDs do not constitute a threat to national security.  There is one retired police officer who has been loud about a coup coming. He knew about what he and the bomb doctor had planned.

When the evidences start making it to the pages of newspapers and social media, Ghanaians would understand better the hypocrisy of the so-called security experts and retired Colonels.

We are unsurprised at all by the feeble and farcical machination by such persons who would have rather the eventual objective of destabilization of the country was achieved.

Why would a retired Colonel want to downplay the importance of the unearthing of IEDs and their production plant as it were? The element of surprise which has been botched is what has hit him and those associated with the Alajo bomb doctor project.

Our so-called security experts who neither know what the phases of war are nor what the parts of a rifle are have been activated falling over each other for space and airtime in the media to showcase their pretentions.

Were weapons found in a container sitting in the premises of a hospital or not? Were explosive-making ingredients found or not? Was there a blacksmith brought in from Alavanyo with the purpose of producing locally manufactured weapons or not? Were telltale weapons not found in another location or not?

Should the intelligence community have just looked on as the Alajo bomb doctor and his accomplices, some of them retired soldiers and politicians continue with their project?

Destabilizing a country does not require emptying all the armories in the country. The youth in Hong Kong have so far not used a firearm yet they have destabilized the country.

Ghanaian media would have to redo their list of security experts, especially since there is a near endless list of decorated retired military and police officers to fall for informed discussion on matters on intelligence, defence and law enforcement.

Hottest Photo Reports
Catch up with all the political quotes from our politicians.
Advertise here
More Editorial
ModernGhana Links
What is the E-Levy?
The pain of a teenage 'Kayayo' at night
The Noise Pandemic Will End If We Enforce Laws
The COVID impunity persists
The Mounted Novelty Is Here
Editorial: Considering the SME lending gap in West Africa
For The Sake Of Road Safety
Our rivers are back
And There Was No Scandal
TOP STORIES