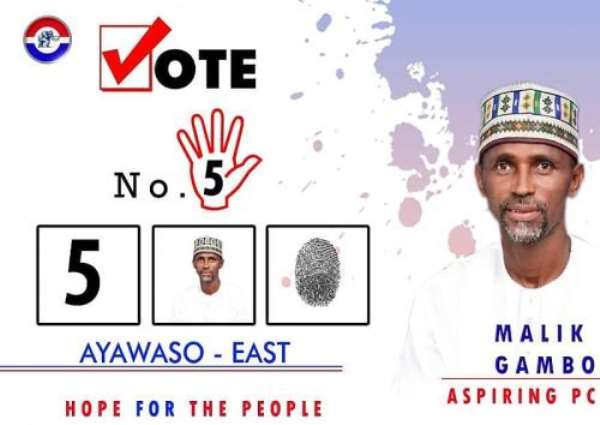 A parliamentary hopeful for the ruling New Patriotic Party( NPP) in the forthcoming primaries, Alhaji Malik Gambo, is confident of winning the Ayawaso East primaries on Saturday.

The aspirant, popularly referred to as Mahma Spain, said he has what it takes to win the primaries and also wrestle the seat for the NPP for the first time from the dominant NDC.

Speaking exclusively to this reporter at his campaign Secretariat at Nima, Malik Gambo noted that the NPP in Ayawaso East needs someone like him to be able to annex the seat that has been the opposition National Democratic Congress ( NDC's) stronghold since 1992.

He mentioned among other things that he is humble, respectful, affable, popular and above all the only one amongst the five candidates that were born and bred in the constituency, which makes him the ideal candidate.

The first time aspirant pointed out that he was highly motivated by the zeal to serve the society hence availing himself to the people and hoping for their massive endorsement.

The businessman, philanthropist, and politician said that he was also motivated to contest by the humble appeal made to him by both NPP members and leadership as well as non-party members to avail himself to lead the party in the constituency.

After much consultations and deliberations with party leaders, members and other political stalwarts in the constituency he was convinced that this is the right time for him to lead the party at the constituency level.

If given the nod, he promised to make the party vibrant in the constituency by transforming the grassroots and party hierarchy.

Among his priorities, he mentioned education, empowerment, job creation and drug rehabilitation.

Alhaji Malik Gambo promised to empower the people through education, skills training and venture creations if given the nod by delegates.

On education, the aspirant promised to set up an educational fund to support brilliant but needy students in the area, ensure frequent extra and vacation classes are organised for students as well as provision of a package for instructors to motivate them to give out their best to the students.

To empower the people, he promised to give interest-free and start-up soft loans to already and would-be business persons and also give periodic skills training on branding and packaging of businesses for the people especially the women. He also disclosed that he will create jobs for the people.

He recently donated a brand new ambulance to the community to help ease the burden of the poor and vulnerable in the community with regards to conveying of the sick and dead to the hospital and cemetery.

He also hinted of a soon to be established community radio, to serve the needs and interests of the Nima and other Zongo communities.

On whether he would not abandoned the party and constituency after he is given the nod, the parliamentary hopeful said " there is no way I will abandon the people. I have properties and businesses in Nima which makes it impossible for me to abandoned them when they need me most ".

The outcome of the primaries either win or lose Alhaji Gambo disclosed, will not change his commitment to the course of the NPP.

" It will rather strengthen and motivate me to do more for the people and the party" he said.

The NPP patron was of the view that politics shouldn't be a do or die affair but a game of ideas and strategies. In that light, he called on his competitors to campaign on ideas and policies and not on insults, rancour, and accusations.

" We are all championing the same course which is service to humanity but with different ideological approach. We must therefore not be fighting or painting each other black just to win sympathies of delegates but rather campaign on issues that will help unite the members of the elephant family not only in Ayawaso East but the country at large" he noted.

He also promised to extend invitations to his opponents to join him campaign should he emerge victorious or join hands with anyone who wins to make the NPP strong and win the seat for the party.

The aspirant also known as Mahma Spain, used the opportunity to caution supporters of all the aspirants to also help in making the campaign and primaries a violent free so that after everything the NPP shall be the winner and more united than before.