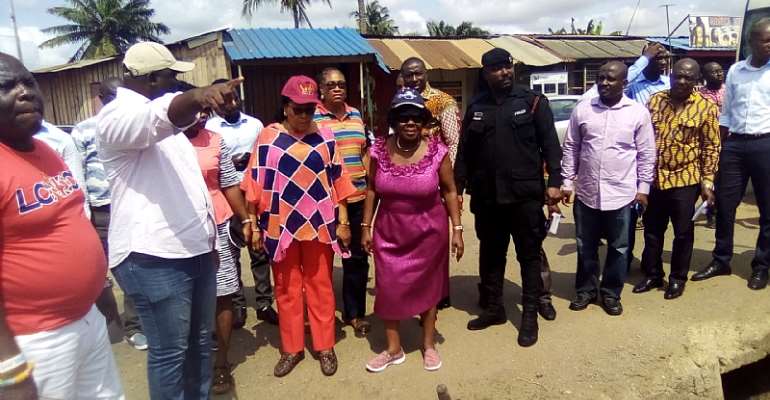 The Minister for Sanitation and Water Resources, Cecilia Abena Dapaah has admonished the various Assemblies to make sure the issue of sanitation in the country is tackled effectively.

She made the call during a tour on September 24, 2019 of some municipalities in Greater Accra Region to ascertain the situation on the ground in relation to the sanitation conditions within the various municipalities.

The tour, she indicated is to determine whether the Municipal Chief Executives are actually discharging their respective duties diligently. And also find out the approach of the general public to the compliance of good environmental practices.

During the tour, the Minister bemoaned some unhygienic conditions found at some areas at the abattoir located at Old Fadama. Thus, she cautioned them to ensure they adhere to good environmental practices or risk being prosecuted by the appropriate authorities.

The Minister commended some service providers in the municipalities in their adherence to the “One business, One Bin” initiative by the ministry which is aimed at ensuring all business owners should provide at least, one bin in their establishments.

She also encouraged the market folks at the Mallam market for keeping the market place very clean lately. To this, the Queen mother of the market, Elizabeth Lamptey attributed this progress to the various market folks meeting twice a month to find ways and means of cleaning the market to address the issue of sanitation.

In his remarks, the M.C.E of Ablekuma West, George Bray, the challenge with the “One Household, One Bin” initiative is due to the fact that there are a number of slums in the municipality which has made it difficult to get bins to each household.

The M.C.E also said the reason for some progress seen in the bid to ensure good sanitary conditions in the municipality is due to the fact that they treat sanitation as an everyday affair so as to meet the expectation of everyone.