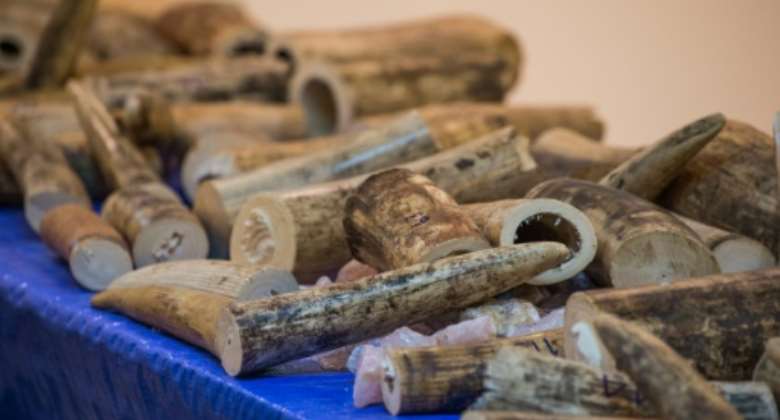 Smuggled ivory originating from Malawi was discovered in cargo boxes at the Bangkok airport in March 2017. By Roberto SCHMIDT (AFP/File)

A Malawi court on Tuesday convicted two Chinese nationals, two Malawians and a Zambian over a huge cache of ivory and rhino horns.

Li Hao Yuan, 28, and Zhang Hua Qin,42, were found guilty along with Malawians Paul Mangwe and Tsogolani Samson and Zambian Frackson Kayoli Banda, a court document said, adding that the sentencing would take place on October 21.

They could get up to 30 years in jail. The Zambian defendant had already pleaded guilty and has received a four-year prison sentence.

The five men were arrested in December 2017 after being found in possession of more than 21 kilograms (46 pounds) of ivory and $42,000 worth of rhino horns.

Poaching has decimated the world elephant population, which slumped in Africa from several million at the turn of the 19th century to around 400,000 in 2015.

According to conservation group WWF, as much as 60 percent of all elephant deaths can be blamed on poaching.

There is a huge demand in Asia for tusks and rhino horns for its purported medicinal properties.

Malawi's director of parks and wildlife Brighton Kumchedwa called hailed it as a "very good development because these are the Chinese that have been causing havoc in the country.

"They have been accused of killing elephants and rhinos and, in the process, rendering Malawi being named as a country of primary concern for wildlife," he said.

"I am delighted to see the government of Malawi making such progress in its fight against organised wildlife crime. Malawi was recently identified as southern Africa's principle transit and distribution hub for wildlife traffickers, and subsequent successes such as this are attracting positive interest and praise from the international community," the agency's executive director Mary Rice told AFP.

The conviction comes ahead of a three-day visit to Malawi by Britain's Prince Harry and his wife Meghan from Sunday. The pair are due to visit the Liwonde National Park in the south of the country.

Minority investigates impersonation of Adwoa Safo in 2022 bu...
3 minutes ago

2022 Budget: Majority’s precedent will haunt them – Minority
31 minutes ago