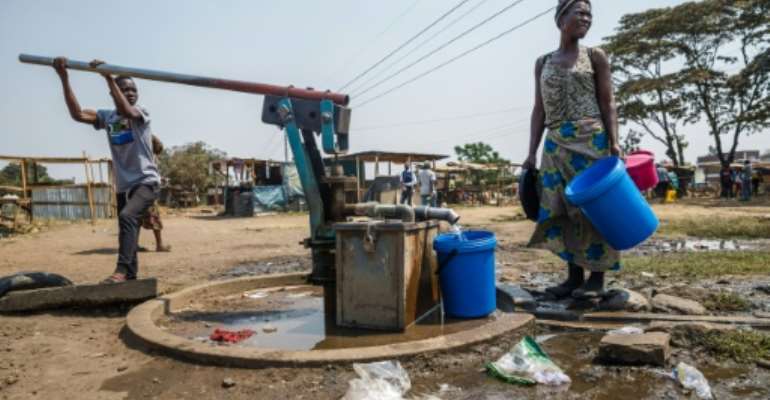 Working class residents like these in the Harare suburb of Glen View rely on water pumped from a boreholes drilled by a donor or city authorities. By Jekesai NJIKIZANA (AFP/File)

After food, fuel, medicine and electricity, the Zimbabwean capital Harare is adding running water to its list of basics that are in short supply.

The city's sole waterworks on Monday had to suspend distribution as it lacked the cash to buy imported water treatment chemicals.

The crisis eased a little on Tuesday.

"Harare City Council has found contingent supplies of chemicals to resume water production. The suppliers of the chemicals have been paid," the city's acting mayor, Enock Mupamawonde, told reporters.

Additional chemicals have also been acquired in Bulawayo, Zimbabwe's second city, he said.

The Morton Jaffray Water Treatment Works, built more than 60 years ago, is subject to regular breakdowns, and loses about 55 per cent of treated water through leakage.

However, the chemicals will only offer temporary relief as they will last a mere seven days.

Mupamawonde said more chemicals were expected, "The chemicals are on trucks on the South African side at Beit Bridge border post."

Some citizens of Harare, a city of 4.5 million, have already been struggling with water shortages for years, even though they are hooked up to the system.

Well-to-do residents have resorted to drilling boreholes on their properties but these need electricity to pump the water.

Zimbabwe is experiencing its worst power crisis since independence in 1980 as Lake Kariba, the source of the bulk of power for the country, cannot generate to capacity due to low water levels, a result of the 2018/2019 drought.

Some install tanks on their properties and have the water pumped into them by enterprising individuals who deliver it in bowsers.

Working-class residents are mostly dependent on city or donor drilled boreholes where hand pumps are used to draw the water.

These are primarily found in rural areas but have become a common feature of life in urban areas.

But the safety of drinking water from these sources is never guaranteed. One such borehole was identified as the source of the September 2018 cholera outbreak which left dozens dead.

Shortages are a chronic problem in Zimbabwe, whose economy was wrecked by hyperinflation and mismanagement during the era of hardline President Robert Mugabe.

Mugabe, who was forced out of office in November 2017 after more than 37 years in power, died on September 6 at the age of 95.