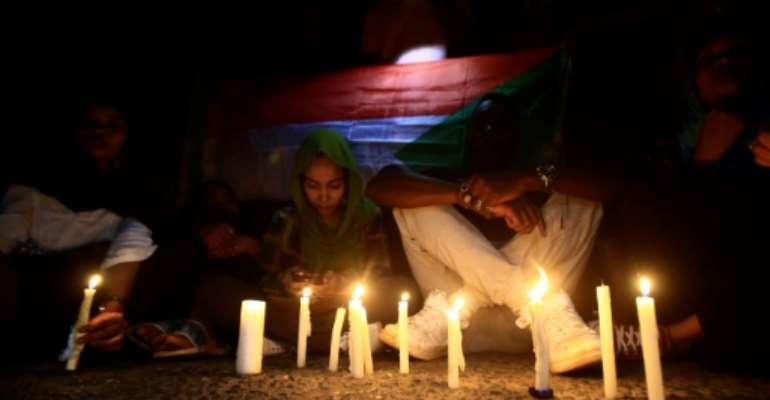 Sudanese protesters have held regular vigils to remember those killed in the June crackdown on a long-running sit-in outside army headquarters in Khartoum. By ASHRAF SHAZLY (AFP/File)

Sudanese police records show 85 people were killed in a crackdown on protesters in June, fewer than reported by protest leaders, the country's Human Rights Commission said on Tuesday.

Shortly before dawn on June 3, gunmen in military fatigues raided a weeks long sit-in outside army headquarters in Khartoum, shooting and beating protesters in an operation that shocked international observers.

The opposition Forces of Freedom and Change said at least 127 demonstrators were killed and hundreds more wounded during the crackdown that lasted for several days.

But the Human Rights Commission said Tuesday that police records show 85 people were killed in the crackdown.

"Police record shows that 85 people were killed and 239 wounded between June 3 and 12 in Khartoum," commission chief Hurriya Ismail told reporters in Khartoum.

She said the armed men who dispersed the protest camp were dressed in uniforms worn by police and the paramilitary Rapid Support Force.

"These troops used maximum force without giving any warning to those inside the sit-in which was a peaceful and legal gathering," Ismail said.

"What happened was a dangerous violation of the right to life, and those involved should face the court for this criminal offence."

Ismail's comments come just two days after the country's new Prime Minister Abdalla Hamdok set up a seven-member committee to probe the crackdown as demanded by the Forces of Freedom and Change.

An earlier probe into the crackdown, conducted by the former military council that seized power after ousting longtime autocrat Omar al-Bashir, had found that members of the Rapid Support Forces, were involved in the crackdown.

The military council had insisted it had not ordered the dispersal of the sit-in, but had ordered an operation, including RSF members, to clear criminals from a nearby area.

A prosecutor who headed that probe revealed in July that an RSF general had separately ordered a colonel to disperse the sit-in, despite having no such order from further up the chain.