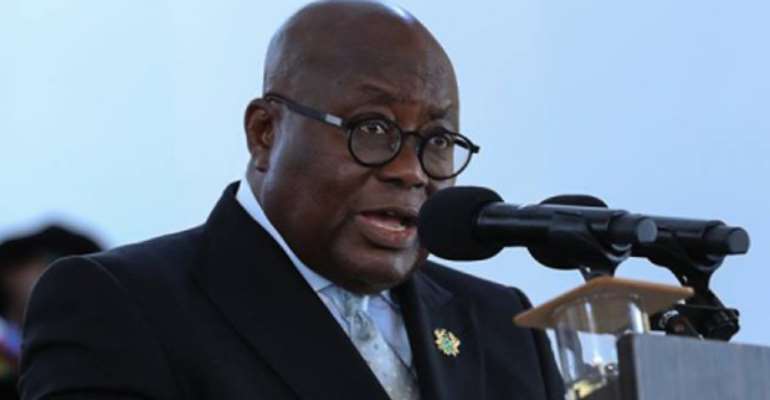 President Akufo-Addo has challenged the public to exercise boldness and come forward with information that could be used in prosecuting appointees who misconduct themselves in his government.

He said keeping vital information and complaining later would not solve Ghana's problems but rather giving out incontrovertible evidence to aid prosecution of such errant officials would bring sanity into the system and accelerate the much needed development of the country.

The President made the statement at a forum in Princeton University in the United States, where he is attending a United Nations General Assembly.

It follows a contribution made by a Ghanaian to the effect that he has documents, videos and pictures to show that some of the President's appointees are involved in illegal mining activities popularly called galamsey.

The President, in his response to the questioner who resides in Colorado in the United States, said “people make these statements but they never come forward to produce the evidence.”

“It is difficult but if you have it, why do you keep it; why don't you send it to the authorities in Ghana…what is the purpose of this information you have on you in Colorado? It is needed in Accra, not in Colorado,” he said.

According to the President, he is “interested in getting hold of information that will allow a proper investigation to be carried out, and then the consequences taken.”

He said the fight against illegal mining or galamsey intensified when he came into office.

He waded into the debate about whether it was appropriate for the government to deport Chinese woman Aisha Huang, whose notoriety in illegal mining earned her a nickname – “Galamsey Queen”.

The President admitted on hindsight that it was a mistake for the state to have deported Aisha Hung without allowing her to face the full rigours of the law.

Midway into the trial of Aisha Huang and others for their involvement in illegal mining activities known in local parlance as “Galamsey”, the Attorney General's Department filed a nolle prosequi before the trial court, and the 'powerful' Chinese woman was deported afterwards without any further delay.

“I think the decision to deport Aisha Huang, on hindsight, was a mistake and that is why that process and procedure is being stopped,” he said.

He said there had been lessons learnt and as part of the effort to protect the environment towards sustainable development, the government together with stakeholders had been working hard to amend the laws and to enhance the sanctions for people who engage in illegal mining and destroy the environment indiscriminately.