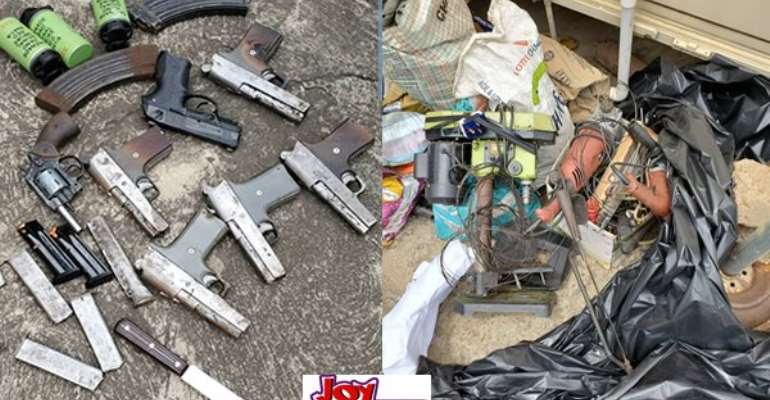 A joint security operation on Friday, according to the government, led to the retrieval of several arms, explosive devices and ammunition from locations in Accra and Kpone-Bawaleshie in Dodowa.

A security analyst, Adam Bonah, has rubbished government claim of linking suspects arrested over the weekend to a bust plan to overthrow the Akufo-Addo government.

According to Mr. Bonah, the government may be justified to link the suspects to terror activities but to suggest that they were plotting a takeover of government would rather scare investors.

A joint security operation on Friday, according to the government, led to the retrieval of several arms, explosive devices and ammunition from locations in Accra and Kpone-Bawaleshie in Dodowa.

Some of the suspects

Speaking Tuesday, September 24, on the Super Morning Show on Joy FM, Mr. Bonah who is also CEO of Security Warehouse Limited, says it was wrong for the government to conclude that the suspects meant to overthrow the Nana Akufo-Addo regime.

He stated further that, it will be difficult for the whole of Ghana’s military to organise a coup, much less the few people caught at Alajo with those weapons.

“These guns cannot even hunt [squirrels and rats] in the Dodowa Forest; I’m being very honest with you,” he told of the SMS, Daniel Dazdie.

He said former president Jerry Rawlings who led the military to overthrow regimes as well as his associates, can share more information on how a coup is organised because what the government discovered does not point to a coup at all.

“If for nothing at all they should have checked with [former president] J.J Rawlings, the ‘father of all coups’…they should [consult] him…Most of those who ended the 1979 coup are still alive, they should ask them."

He also faulted the government for leading communication on the matter which he said should have been left for the Police because “it is too small a matter.”

However, Information Minister in an earlier interview on the Show maintained that the government has in its possession, audio and audiovisual materials to back the claim that the persons in custody planned to overthrow the current administration.

“For us, we are pleased that the state security agencies did not wait for it to get too late…We have informed the nation and the next step will be that they [security agencies] would have to complete their interrogations and their investigations and take it before a competent body to adjudicate this matter.”

Lawyer for the suspects, Victor Kojogah Adawudu, however, suspects the development may have been the creation of the government to divert attention from the public on other sensitive issues.

Listen to the audio below which also includes interviews with Col. Festus Aboagye (Retired) as well as Dr Kwesi Aning of the Kofi Annan International Peacekeeping Training Centre (KAIPTC).