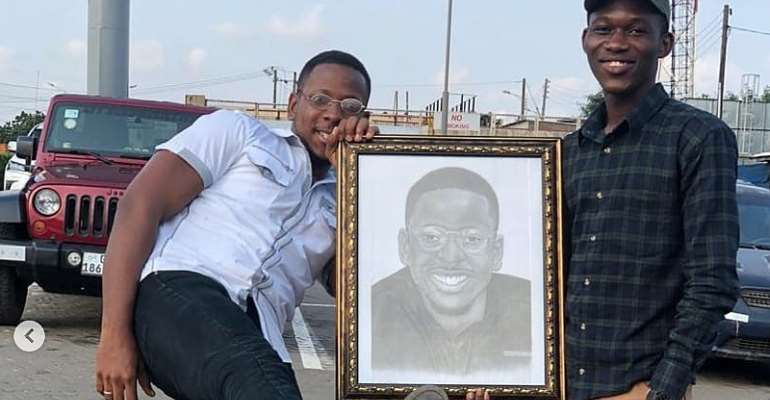 “The artist may be long gone from earth but when we stand before a piece of his art – be it building, writing, paintings, drawings, etc, we must be able to see the artist still breathing in it,” said Polypencil, a Ghanaian hyper-realistic artist.

In an interview with #TheAfricanDream.net Polypencil explained that “a great artist makes himself immortal by leaving a part of himself in his craft that channels aspirations, joys, tears, fears, and dreams of all who stare at a said masterpiece. That’s when we can rightly say the artist has become timeless.“

As an artisan, Polypencil feels he can achieve such mastery in his craftsmanship through his pencil drawings. Known in personal life as Polycarp Kenneth Adaboh, but popular on social media and the art circles as Polypencil, the young artist feels his passion will lead him to his dreams of attaining timelessness.

Polypencil told TheAfricanDream.net that he derives his inspirations for his creations from his immediate environment, random comments, and encouraging words from people. He is learning from other masters online and adds that he is motivated by the wonderful works by British-the award-winning British-Nigerian Kelvin Okafor, his role-model.

“It is the way I figure out my sketches and proportions and bring out the drawing in a hyper-realistic level that sets me apart from others. When I begin a project, I imagine the expectation of the person I’m drawing and put myself in their shoes, then I realize they will want the best. So I let my accuracy and passion do the detailing as I deliver the piece. Being able to figure out the effects on the human skin and textures of an object makes my work unique too…”

Polypencil disclosed to TheAfricanDream.net that there’s a plan in the pipeline to produce a grand artwork which will be titled ‘Letter to Oprah Winfrey’. “Oprah’s will be bigger than my first work on Mr. Steve Harvey,” Polypencil said. When asked who he will love to work with, the young Ghanaian artist didn’t think too hard and he quickly mentioned — Kelvin Okafor.

Okafor’s works are so real and amazing. Polypencil believes working with Kelvin would be an opportunity for him to learn more and polish his craft. Just like most artists in Africa, Polypencil also faces the challenges of unavailability of resources, funding, and getting value for his craft.

He admits these challenges, “…have in many instances forced me to quit drawing a few times, but my passion for the art has always made me hold on to his pencil,” he continued to reassure: “I would like to encourage every upcoming artist out there that they should keep on with what they do. Never give up on your dreams because surely there is a time of success for everyone, whether a pencil artist or an Uber driver.”