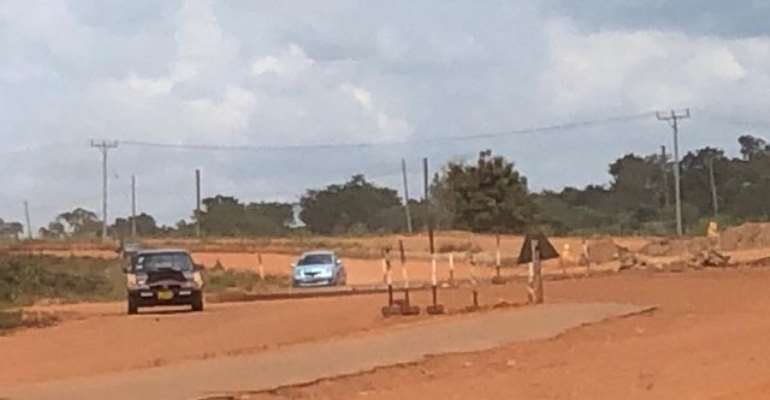 The abandoned dual carriage road from Sokode to Ho.

Motorists in the Volta Region are getting more and more impatient about what they say is government’s delay in continuing road projects, which were abandoned after the New Patriotic Party (NPP) took up government.

Numerous road projects under the previous National Democratic Congress (NDC) administration were put on hold by the current government, pending the results of audits to ascertain whether due processes were followed in the award of those contracts.

In addition, government also stopped the construction of roads that were captured under the cocoa road programme across the country as part of a rationalisation exercise.

A year ago, the Minister of Roads and Highways, Kwasi Amoako Atta, announced that the rationalisation report was ready and sooner than later, contractors will return to site.

Some of the abandoned roads that have become a major concern to the people are Jasican-Kejebi, Nkwanta-Kpassa, Nkwanta–Dambai, Peki through Kpeve–Hohoe roads that forms part of the Eastern Corridor Road Project. The rest include Atsito-Fiaxo road, Todome-Kpalime through Tongor–Dzemeni, Vakpo-Wusuta Kpebe and a dual carriage road from Sokode to Ho among, many others across the Volta and Oti regions.

In July 2018, while touring the region, President Akufo-Addo, accompanied by a high-powered government delegation, travelled on some of these abandoned portions of the road to ascertain the state of work in the region.

The Minister for Roads and Highways, Kwasi Amoako Attah, who was part of the President’s entourage indicated according to reports, that, the rationalisation exercise was over and did not make any adverse findings against Rolider Construction, the firm working on some of the cocoa roads in the Oti Region, hence work was going to start in two weeks.

This promise by the Roads Minister, has not been fulfilled causing disaffection in the communities that these roads have been left abandoned.

In an attempt to draw the government’s attention to these concerns, a group calling itself the “Fix Abandoned Volta Roads Campaign” has lined up series of street demonstrations.

In a statement jointly signed by Joshua Edem Tetteh and Frank Torblu, organisers of the demonstration stated among many other things that, “currently in the Volta region, Roads started by the previous government have been abandoned by the current government leading to further deterioration of roads, increased cost of construction of the same roads which is preventing the poor tax payer from having value for money.”

The Volta Regional Minister, Dr Archibald Letsa, in an interview said, the government, led by President Akufo-Addo, plans to fix all on-going road projects across the country including those in the Volta Region.

“No government will be happy to see its roads deteriorate. It is not possible to allow that. We are very much concerned and we are currently making arrangements to secure some funds to allow work to start soon,” he assured.

Touching on the demonstration, which comes off today, Tuesday, September 24, the Regional Minister acknowledged the right of the citizens to demonstrate adding that he had been interacting with some concerned groups about the state of the roads in the region.

Dr. Letsa also assured that, the government will work towards ensuring that work continues on the various projects across the region.