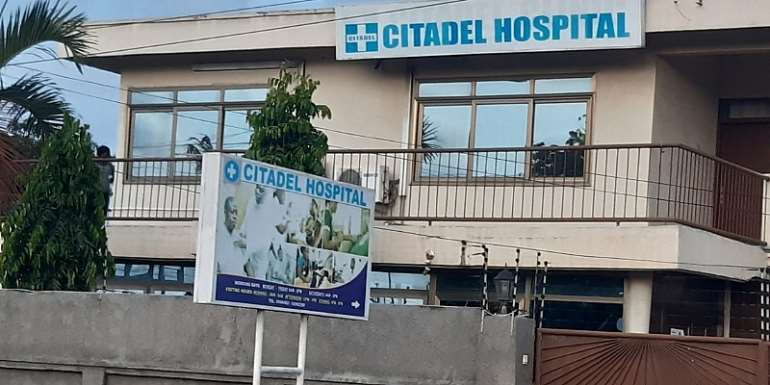 There’s anxiety in Alajo, a suburb of Accra, following the arrest of three persons believed to be plotting a takeover of the Akufo-Addo government.

The report of the alleged covert activity in the area has also been met with some denial from the residents.

Dr. Frederick Yao Mac-Palm and his two other accomplices; Ezor Kafui and Bright Allan Debrah Ofosu, were arrested by security operatives last Friday after a raid on the Citadel Hospital which Dr. Mac-Palm manages.

Two days later, it emerged that they were arrested because they were suspected to be plotting to create instability in the country after a 15-month investigation by security operatives, according to the government.

The arrest also led to the “retrieval of several arms, explosive devices and ammunition from locations in Accra and [Kpone] Bawaleshie near Dodowa.”

But as the community processes the news, some Alajo residents have told Citi News there has never been any indication of unusual activities at the hospital for the past eight years.

“For the doctor, we all like him. I can't believe because I never saw anything,” one resident disclosed to Citi News.

Another one said he was very shocked by the development.

“To believe this thing, I don't know what to say. When I heard it I said no. If the doctor will deal in weapons, maybe not here.”

The government said the three suspects had tried contacting a number of serving military officers to help in the attack.

“Surveillance on the activities of the persons involved commenced in June 2018, when Dr. Mac-Palm and Bright Allan Debrah Ofosu (“BB” or “ADC”), started organizing a series of meetings at the Next-Door Beach Resort, in Teshie, and other locations in Accra, in furtherance of their objectives.”

“Between June and August 2018, BB, acting for and on behalf of Dr. Mac-Palm, contacted a number of serving military personnel, and talked them into hatching and executing a plot to obtain weapons, take over key installations, and secure funding for the purpose of taking over the reins of government. These meetings were closely monitored,” a statement from the government explained.

The statement from the Information Ministry added that, in furtherance of this scheme, Dr Mac-Palm contracted one Mr. Ezor from Alavanyo to produce locally made weapons and Improvised Explosive Devices (IEDs) for the operation.

“In July 2019, Mr. Ezor set up a workshop in a container, originally used as an X-Ray laboratory, at the premises of Citadel Hospital, and started producing the weapons and IEDs in-house. On 10th September 2019, Dr. Mac-Palm and Mr. Ezor procured from the Korle Bu Teaching Hospital, some essential chemicals to be mixed with gun powder, stone chippings, surgical needles and powdered pepper for their operations. He also contracted a worker at the Base Workshop in Burma Camp to supply 10 AK 47 riffles. He made an advance payment of GH¢7,000.00.”

The Information Ministry in the statement narrated that “On Thursday, 19th September 2019, at about 2300 hours, still under surveillance, Dr. Mac-Palm, Mr. Ezor, and one soldier went to an area close to the Laboma Beach to test fire some of the locally manufactured weapons.”

They were however arrested the following day.

“On the following day, 20th September 2019, between 0915 and 1755 hours, a team of security personnel undertook the operation which led to the arrest of Dr. Mac-Palm and his accomplices, and the subsequent retrieval of the items listed above,” the statement added.