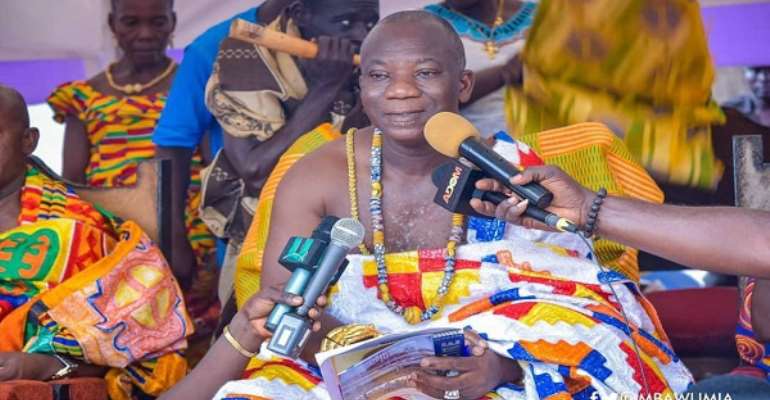 The Eastern Nzema Traditional Council in the Ellembelle District of Western Region has banned drumming and noise making.

The ban, signals the beginning of activities lineup for this year's Kundum festival.

The ban on drumming and noise making in the Eastern Traditional Area started on Monday September 23, 2019 and it is expected to be lifted on Sunday, October 27, 2019.

According to a statement issued and signed by the President of the council, Awulae Amihere Kpanyinli III, Churches, shrines, schools, drinking bars and the general public are to obey this directive.

The statement said the celebration would begin at Asanta on Sunday, September 29, 2019 and would finally be climaxed at Atuabo, the seat of the Eastern Nzema Traditional Council on Sunday, October 27, 2019, where the Paramount Chief and all his sub-chiefs would convene to raise funds for a developmental project.

Last year's celebration brought the Vice President of the Republic of Ghana, Dr. Mahamudu Bawumia as the special guest of honour.

The statement has emphasized that anybody within the Traditional Council who would flout the rules and regulations governing this year's festival would be dealt with ruthlessly without any favour.

The statement is, therefore, entreating the general public to adhere to the directive in order to ensure peace and harmony.

The ban on drumming and noise making is very important when it comes to the celebration of Kundum festival for the people of Eastern Nzema Traditional Council and it is believed that during the celebration, the gods hate noise making.

The Eastern Nzema Traditional Council is the highest Traditional Authority in Nzema with its traditional capital at Atuabo, which is the seat of the Paramountcy and where the Omanhene resides.

The Eastern Nzema Traditional Council covers a total area of 999.8Km square which constitutes about 9.8 per cent of the land mass of the Western Region and headed by the Paramount Chief, Awulae Amihere Kpanyinli III.

The Council has thirty-two (32) Chiefs and Queen Mothers and about thirty-six Odikros over the various villages.

Data from the 2020 Population and Housing Census (PHC) indicates that the Eastern Nzema Traditional Council had a population of 87,501 constituting 3.7 per cent of the entire population of the Western Region.

Kundum is an annual festival of the chiefs and people of Ahanta and Nzema, normally celebrated to usher in bumper harvest starting from Essikado through all the way to Ahanta towns and to Axim and Adoabo. All sub-stools would perform the festival and finally end up at Beyin in the Jomoro district.