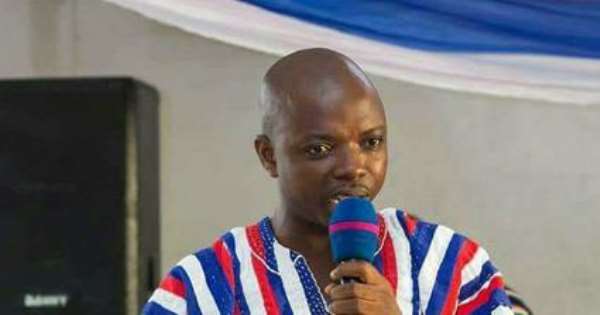 The action, is to force the state to act in determining the faith of lawmakers in the country accused of receiving double salaries.

Although the controversial issue had gained national currency but it subsequently died out as the Controller and Accountant General and Parliament worked to rectify the anomaly that had occurred.

Interestingly, the controversial politician belonging to the governing New Patriotic Party has vowed never to allow sleeping dog lie and therefore has initiated the court action to resurrect the matter.

He believes it was unjustifiable for Members of Parliament to be implicated in the double salary debacle.

"Ghana’s constitution per article 71 requires that MPs, who are appointed ministers, may either choose to receive their salaries as ministers or take what their colleague MPs are taking – although other benefits are attached", he said.

Below is the notice of intention issued by the NPP Chairman to commence the civil action against the State:

The Attorney General & Ministry of Justice,

NOTICE OF INTENTION TO COMMENCE A CIVIL ACTION

With wanton disdain for national interest, patriotism and national love as against personal or political party interest, I write this notice in pursuant of section 10 of the STATE PROCEEDINGS ACT - 1998 (ACT 555) to notify the Attorney General of my intention to institute a civil action against the State.

According to a report by the DailyGuide newspaper, and a subsequent interrogation by the Criminal Investigations Department Of the Ghana Police Service which suggest to confirm the report of the Daily Guide Newspaper, some ministers of state of The Republic Of Ghana who coupled as Members of Parliament (MPs), were drawing salaries as MPs and at the same time receiving their monthly salaries as ministers, contrary to the law.

Ghana’s constitution per article 71 requires that MPs, who are appointed ministers, may either choose to receive their salaries as ministers or take what their colleague MPs are taking – although other benefits are attached.

Upon investigations by the Financial Audit Department Of the Criminal Investigations Departmental Of the Ghana police service, the police confirmed that the actions and inactions of these Members Of Parliament was in violation and contrary to section 124 (1) of the Criminal and other Offences Act 1960 (Act 29) as amended in 2012 (Act 849). Section 124 relates to the offence of stealing.”

On the other, I deem it appropriate that, the acts of the MPs also amount to the offense of using public office for private gain.

Also, it is trite that, every form of payment is not bereft of risk! Individuals hit by this scandal and offense certainly did not authorize their own payment.

So, the question here is who authorized the double payment of the said salaries? It would amount to a gross miscarriage of justice and unfair to castigate, criminalize and prosecute employees or persons who took double salaries but did not determine and pay their own salaries and pardon persons or officials who determined and paid those double salaries. They should be jointly held liable.

Although article 71 of the 1992 constitution enjoins the president to determine the salaries of the aforementioned articles office holders, the actual payment is the responsibility of the Controller and Accountant General [CAG]. Article 71 (1) and (2) of the 1992 Constitution states that the determination of the salaries and allowances of the Executive, the Legislature and the Judiciary paid from the Consolidated Fund must be determined by the President, on the recommendations of a committee of not more than five persons appointed by him/her and acting upon the advice of the Council of State.

Why then must the ministers be paid from the presidency? The Financial Administration Act 2003 (Act 654) states the functions of the of CAG as follows:

(2) The Controller and Accountant-General is responsible for the compilation and management of the accounts prepared in relation to the Consolidated Fund and other public funds and for this purpose the Controller and Accountant-General may give general instructions to the Principal Spending Officers of departments which shall not be inconsistent with this Act or any regulations or instructions issued under this Act.

(3) The Controller and Accountant-General is the Chief Accounting Officer of the Government who has the responsibility to keep, render and publish statements of public accounts as required by this Act or any other enactment.

(4) As Chief Accounting Officer, the Controller and Accountant-General is the chief adviser to the Minister and the government on accountancy matters and is the person who approves accounting instructions of departments and promotes the development of efficient accounting systems within departments.

(5) The Controller and Accountant-General receives, disburses and provides secure custody for moneys payable into the Consolidated Fund and other funds and for this purpose shall establish such accounts with the Bank of Ghana and its agents as are considered necessary for the deposit of the moneys.

(7) Without limiting the generality of these duties, the Controller and Accountant-General shall;

(a) in consultation with the Auditor-General, specify for departments, the accounting basis, policies and the classification system to be applied in public accounting and ensure that a proper system of accounting is established in each case; and

(b) ensure, in so far as is practicable, that adequate provisions exist for the safe custody of public money, securities and accountable documents”.

Needless to say, the staff of the Controller and Accountant General department are not saints. Payroll anomalies are inevitable but the degree of harm and financial loss on the state is the real issue, payment of double salaries raise some suspicions. Every now and then the government of Ghana conducts headcounts to ameliorate payroll anomalies and, innocent teachers at Ghana Education Service are harassed.

In conclusion, I believe the real syndicates are in the CAG departments. Believe in me, the thoroughgoing issue of double salaries could be happening for a long time! The Special Prosecutor Mr. Martin Amidu and the majority leader and minister for parliamentary affairs, Osei Kyei Mensah-Bonsu have confirmed receiving double salary before. Let us consolidate the payment of ministers who are also legislators in future. Those who paid the ministers are also complicit in this issue and hence must be equally dealt with.

Finally, I would like to emphasis that, upon the expiry of the 30 days ultimatum provided for by STATE PROCEEDINGS ACT - 1998 (ACT 555) I will proceed to take a civil legal action against the MPs who took double salaries.

The Controller and Accountant General