Jellyfish thrive in the man-made disruption of the oceans 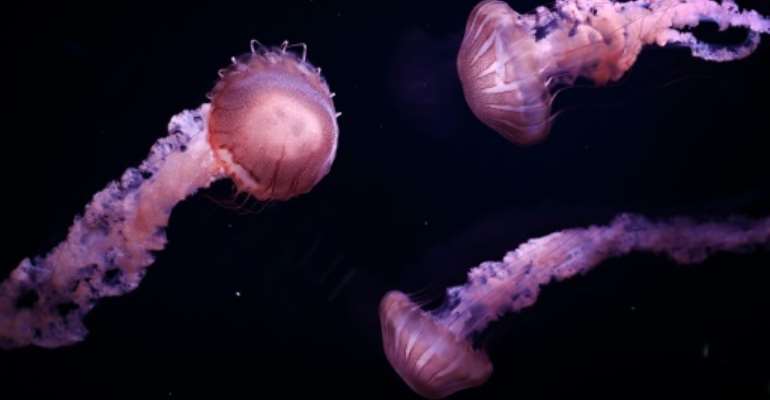 Jellyfish are breeding at a much higher rate than before, thanks to changes in their enviroment wrought by human activity. By Philippe LOPEZ (AFP)

Thousands of them plague our beaches to the horror of holidaymakers who dread their sting, but thanks to man's disruption of the oceans, jellyfish are thriving.

Jellyfish have been on Earth longer than we have -- they are believed to have roamed the oceans for nearly 600 million years.

But human activity, from over-fishing to plastic waste and climate change, has created an environment in which they are even more at home.

The proliferation of the jellyfish could lead to what some observers are calling the "jellyfication" of the oceans, which are facing profound changes according to a draft UN report due out on Wednesday.

Fabien Lombard, a French marine biologist at the Sorbonne University specialising in the ecology of plankton and jellyfish, would not go that far.

"There are more jellyfish in certain zones in the world," he told AFP: the Black Sea, off the Namibian coast and the Sea of Japan.

It is not clear if their presence has increased in other parts of the world, because it is difficult to actually count them, although worldwide database was set up in 2014 to track them.

Jellyfish, which were among the first inhabitants of the planet, today live in all the seas and oceans of the world and at every depth.

The invertebrates have no brain, are 95-98% water and float and swim with the ocean currents.

They are incredibly diverse creatures, appearing in a huge range of colours and sizes.

Jellyfish even reproduce in different ways during their life cycles.

Adults spawn, releasing a huge quantity of eggs and sperm into the water. The fertilised eggs sink to the ocean depths before hatching a small polyp, which can then clone itself.

When vast numbers of jellyfish mass together it is known as a "bloom". In the past these would happen at regular intervals, said Anais Courtet, a biologist at the Paris Aquarium -- every 12 years in the Mediterranean, for example.

"Today, this cycle is no long respected and you see it every year," she added. 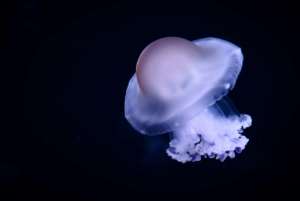 Jellyfish can be found in all the seas and oceans of the world. By Philippe LOPEZ (AFP)

For Philippe Cury, a specialist in marine ecosystems at France's National Research Institute for Development, this is due to manmade factors such as overfishing, deep-sea trawling and the heating of the oceans.

"These three factors provoke eruptions of the jellyfish population," he said. "These always happen," he added, "but they are a lot more frequent and we sometimes see absolutely incredible quantities."

Overfishing has eliminated some of their natural predators, such as tuna and sea turtles that are often accidentally caught in nets, but also the fish who feed on plankton.

With their predators reduced in number, the jellyfish have more plankton to feed on themselves and have thrived unchecked.

Deep-sea trawling has also helped them. The trawlers drag giant nets across the ocean floor pulling up everything indiscriminately: sponges, worms and coral.

That leaves an environment in which the jellyfish polyps can breed unchecked, Cury explained.

And they have made human objects part of their own habitat too, from buoys right up to oil rigs.

"They adore plastic," said Lombard. Plastic waste of just a few centimetres can serve as a breeding colony to them. 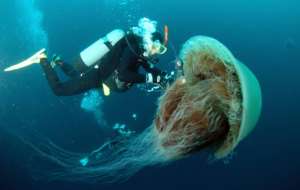 And while global warming and the acidification of the oceans might have hit some species, it has done jellyfish no harm, said Courtet.

Their proliferation has got to the point where they are even now interfering with human activity -- and this goes way beyond stinging unwary holidaymakers.

It's a problem for fishing, for fish farming and for desalination plants. They can even clog up the cooling systems on nuclear installations.

For example in 2007, jellyfish decimated the salmon at a fish-farm off Northern Ireland, stinging the fish, which were unable to escape.

In Japan, fishermen sometimes call off fishing expeditions if there are too many jellyfish in the waters, for fear the weight of the creatures will cause them to lose their nets or even capsize.

Any thought of fishing the jellyfish themselves -- whether to eat them or just get rid of them -- is not practical, he added. "They reproduce very quickly."