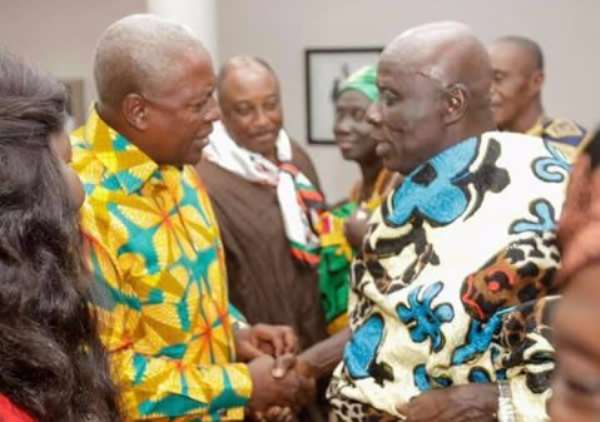 The National Democratic Congress (NDC) has three days to appease the Okyehene, Amoatia Ofori Panin II, for comments deemed derogatory against the paramount chief by the party’s Ashanti Region Secretary.

Addressing a demonstration organised by the Akyem Abuakwa Traditional Council Monday to express disquiet about the said disparaging statement, Secretary of the Council, Daniel Marfo Ofori-Atta said: “a ritual pacification must be performed by the party to appease His Majesty the Okyenhene.”

According to him, the NDC will not be accorded “any future request for clemency and redemption of their customary transgressions if they fail” to accede to this demand.

“If they fail to heed, the National Democratic Congress, its Ward Executives, Branch, Constituency, Regional and National Executives will be banned from all official functions organized under the auspices of the Ofori Panin Stool and shall be declared persona non grata in all palaces of the over 940 towns, villages and settlements in Akyem Abuakwah,” he warned.

Kwame Zu is reported on many online platforms to have said last Thursday that the people of Kyebi competed with animals until former President John Mahama provided water for its residents, despite the town being the hometown of President Addo Dankwa Akufo-Addo.

The Akyem Abuakwa Traditional Council seems to perceive the comments as an insult to the Okyehene, the Paramount Chief.

That within three days, the Council demands the following:

1. A direct, clear and unambiguous public apology be rendered by the leadership of the National Democratic Congress to His Royal Majesty the Okyenhene and Okyeman.

2. A ritual pacification be performed to appease His Majesty the Okyenhene.

3. An apology rendered personally by Mr Kwame Zu to the Okyenhene and a public recantation of the offensive words and specific conduct complained off.

4. Invocation of appropriate disciplinary sanctions of the party against the conduct of Kwame Zu.

Meanwhile, Kwame Zu has since issued a statement apologising for his remarks.