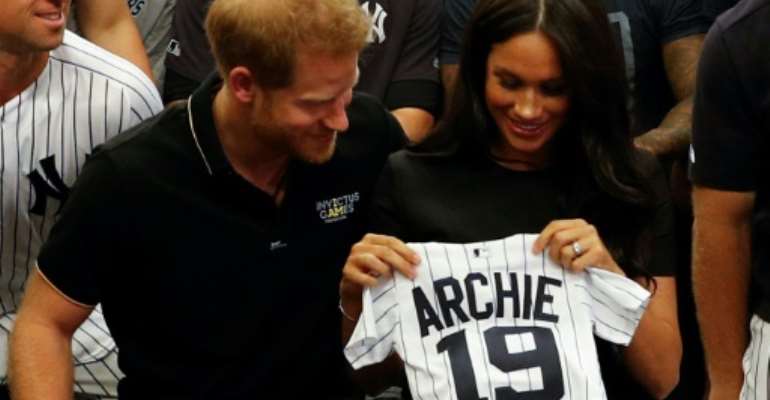 The couple have tried to keep baby Archie out of the public eye (file picture). By PETER NICHOLLS (POOL/AFP/File)

The 10-day trip began with an education workshop in Nyanga, a township crippled by gang violence and crime that sits on the outskirts of the city's stunning beaches and rolling vineyards.

The royal couple will then tour District Six museum, a memorial to the expulsion of some 60,000 non-white residents from the city centre during apartheid.

The Duke and Duchess -- an American who describes herself as "half black and half white" -- will delve into South Africa's history and life under the apartheid regime, which classed and divided people according to their skin colour.

Those defined as "black" or "coloured" were considered second-class citizens and only allowed in "white-only" areas provided they had a pass.

For some in South Africa, the presence of a royal with mixed heritage could make this visit particularly special.

"(I am) very happy they're coming," said Victoria Simanga, whose daughter was attending the event in Nyanga.

All eyes on baby

Harry first visited Africa when he was 13 and has since travelled widely across the continent.

After spending a gap year in Lesotho, he jointly founded the charity Sentebale in 2006 to help support children affected by HIV.

Harry and Meghan holidayed in Botswana at the start of their romance in 2016, and returned as a couple the following year.

Britain's Prince Harry and his wife Meghan will be on their first official tour as a family. By Tolga AKMEN (AFP/File)

But the trip marks Archie's first major public appearance since his birth in May.

At less than five months old, the baby will become one of the youngest royals to take part in an official visit.

He last appeared in public on the sidelines of a royal charity polo match in July.

Harry last saw Tutu in Cape Town in 2015, when he presented the archbishop with an honour in recognition of his services on behalf of UK communities and international peace.

Tutu and his wife have described their meeting with the royals, scheduled for Wednesday, as a "rare privilege and honour".

The family flew with a commercial airline for the more-than 11-hour flight to Cape Town. They had come under fire for using private jets several times during the summer.

Harry and Meghan said on Instagram earlier this year that they would be turning their "attention to the environment".