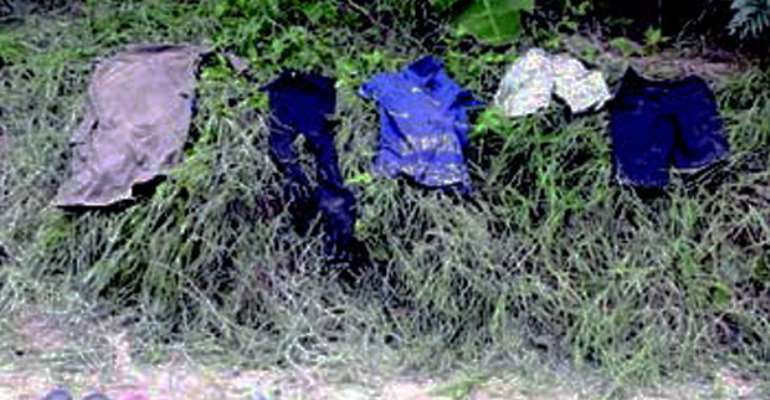 Clothes of the kids

seven children have lost their lives through flood-related incidents within the past two weeks in Kumasi in the Ashanti Region.

Three of them lost their lives exactly two weeks ago, and the remaining four perished when they were washed away in a stream at Breman on Saturday evening.

Kwabena Nsenkyire, the Ashanti Regional Director of the National Disaster Management Organization (NADMO), made the disclosure to DAILY GUIDE yesterday.

Highlighting the latest four deaths, he said six children went to swim in a stream, which had overflowed its banks after a heavy downpour, at Breman on Saturday.

Four of the children were suddenly swept away by the strong currents, while the remaining two managed to run to safety to tell what had happened. He mentioned the names of the dead children as Clinton Gyamasi, 9; Israel Asante, 9; Seth Owusu, 10; and Abedallah Osman, who is also 10 years old. According to him, the sad incident happened around 4:30 pm on Saturday but the bodies were eventually found around 11 pm after a wild search.

He said the boys were rushed to the Tafo Government Hospital where they were pronounced dead on arrival. The bodies are currently in the morgue for autopsy.

Mr. Nsenkyire also said three other children, who are also below 10 years old, had early on died through flooding in other parts of the city. He said Mercy Attah, 9, was washed away by floods at Anloga Junction; Augustine Antwi, 6, also died in a similar fashion at Kokoso and another boy died at

Kwabena Nsenkyire expressed disgust over the deaths and blamed the city authorities for the deaths, saying “all the playing grounds in the city have

been sold to developers!”

According to him, since there are no playing grounds for the children, they (children) are forced to visit streams to swim at their leisure time and some have resulted in deaths.