Why Nkrumah Is Actually The Founder Of Modern Ghana 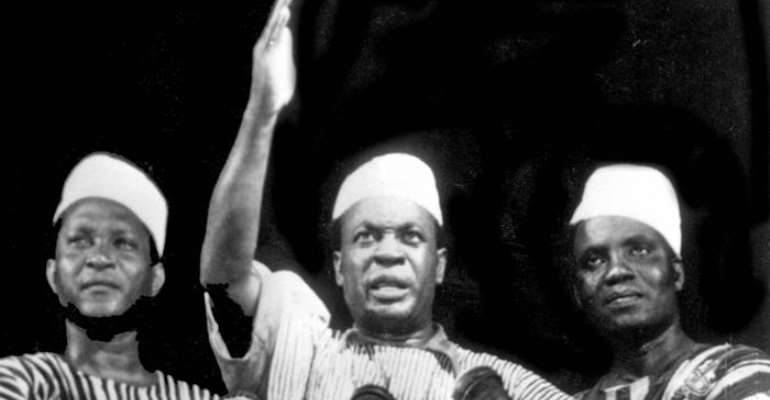 Nkrumaists must not continue to waste their energies rebutting the intellectually dishonest argument by today's progeny of Dr. J. B. Danquah & Co - who now seek to rewrite our history. What matters is that the vast majority of people with African heritage whose DNA and cultural roots lie in the continent, regard Nkrumah as the Pan-Africanist giant who founded modern Ghana. Full stop.

The plain truth, is that Dr. J. B. Danquah & Co were rabid tribal-supremacists, who wanted the independent state that would emerge after the departure of the British colonialists, to be a federation made up of the pre-colonial tribal entities - and therefore worked secretly with the British occupiers of our Motherland for that end. That is a fact.

Yes, it is also a fact that it was Paa Grant who took the initiative of asking Dr. J. B. Danquah and a number of other prominent individuals in the Gold Coast, to form a political grouping that would fight for independence from Britain, which he would entirely fund himself. (Incidentally, who has ever heard any of Paa Grant's family members claiming that he founded Ghana - because he bankrolled his own idea that we had to rid ourselves of the greedy British colonialist exploiters of the Gold Coast and benefit from our own rich natural resources, ourselves, that way? But I digress.)

However, being ruthless capitalists, who wanted to eat their cake and still have it; to enable them deal with the huge problem of being too busy making money to leave their lucrative jobs for such a daunting proposition, they took Ako Adjei's advice, and asked Paa Grant to send Nkrumah money (£100), to pay for his boat passage back home - for him to be the poor-monkey-dey-work, slaving for super-wealthy-baboons-to-chop-nyafu-nyafu.

The idea was that when he arrived in the Gold Coast, Nkrumah would embark on the full-time nationwide campaigning, which they all knew was needed to conscientise the masses, and get them to back the fight to free the Gold Coast from the British colonialists who had occupied its landmass, for them to benefit from his hard work - and end up wielding perpetual power and enjoying the low-hanging-fruits of their elitist post-independence federation of pre-colonial tribal entities that made up the Gold Coast colony.

Above all, what Dr. Kingsley Nyarko and his fellow-travellers deliberately forget, is that Dr. J. B. Danquah & Co were lackeys of the British colonialists and well-paid agents of Western imperialism. How can such sell-out-politicians be nationalist founders of modern Ghana?

Kwame Nkrumah is regarded by Posterity as the founder of modern Ghana globally, because it was his bold vision of a new and modern African unitary nation-state in which one could rise to the top in a meritocratic society regardless of class, tribe or religion that the masses voted massively for, in the crucial elections of 1951, 1954 and 1956. Inherited privilege, is the greatest enemy of meritocracy, as we all know. The masses were no fools.

That is why yesteryear's tribal-supremacist pre-independence-era politicians (whose political progeny most of today's vile revisionists are, incidentally), by definition, could never have founded Ghana, the modern multi-ethnic, unitary African nation-state whose citizens shared a common destiny,? That is why it was Nkrumah's competing nationalist vision that eventually won out in the end, after independence in March 1957. Nkrumah is the founder of modern Ghana for that reason. And we thank God for that.

The author has 688 publications published on Modern Ghana.