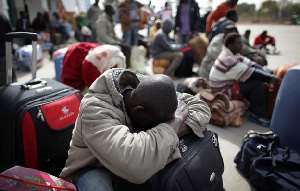 A statement issued by the Assistant Superintendent Barbara Sam, in charge of Public Relations at the Kotoka International Airport said the deportees comprise 38 males and two females arrived on board a chartered flight US, Omni Air International Boeing 777-OAE 328.

The statement said 38 of them arrived on a travel certificate issued by the Ghana Mission in Washington DC whilst two of them on Ghanaian passports.

It said 16 of them were from Greater Accra, 10 from Ashanti, two from Brong-Ahafo and two from the Western regions.

The statement said the remaining were two from Central Region, three from Eastern and three from Volta regions.

In a similar development, the statement said 12 Ghanaian females aged from 20 to 30 years have also been deported from Saudi Arabia for illegal stay.

It said they were mostly junior and senior high school leavers who were working as domestic help, storekeepers and fuel attendants.