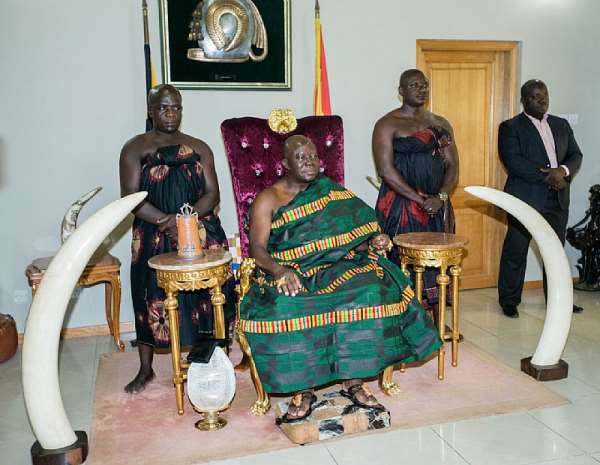 A policy think tank has called on Ghanaians to desist from fueling tensions in the country after the comment by the Asantehene Otumfou Osei Tutu II, Asante king in from the Ashanti Region at the United Nations.

According to the group We the People Matter Movement, the recent war of words, following Asantehene, Otumfuo Osei Tutu’s speech at the United Nations (UN) leaves us with lots of lessons.

Indeed, several conspiracy theories might emerge regarding the meeting of the Ashantehene, Nana Akufo-Addo, John Dramani Mahama and Charlotte Osei.

Regardless of what transpired in these closed doors meetings, it is obvious issues of a peaceful before and after elections were discussed, this was contained in a statement signed by one of its conveners, Hassan Zakaria.

Below is the full statement issued by the group in Accra

NDC’s denial or NPP’s fueling of tensions should, by all means, stop to ensure a peaceful Ghana – we have only “One Ghana”.

Tensions related to if the Ashantehene truly spoke to ex-President John Mahama to concede defeat or not is rather something the nation shouldn’t dwell so much on.

We should rather focus on commending all the parties involved for listening to the Otumfuo and ensuring a smooth transfer of power in not only the 2016 elections but also in previous elections.

Let us not forget that several nations have been torn apart by electoral violence due to lack of timely mediations.

It is regrettable that our focus on the Otumfuo’s speech is rather on what divides us than unites us. For example, why are we not discussing ways to contribute towards the Otumfuo’s Foundation, or commending his role in negotiating lasting peace in Dagbon?

However, we will only end up finding ourselves in back and forth statements without end, with Ghana losing greatly.

All parties should, therefore, remember to still coexist and watch their actions and inactions as these depicts to a larger extent the caliber of persons and institutions we have.

If Ashantehene Otumfuo Osei Tutu has among others mediated talks for peace to reign in Dagbon; set up a charity to promote among others good health, technology, education; called on investors to invest in Ghana etc and all we can do as Ghanaians is single out one statement out of a whole speech, then shame on us. It is about time our chiefs and traditional leaders from other ethnic groups join hands with the Otumfuo to both promote peace and ensure the development of Ghana.