Mahama Has A Message! 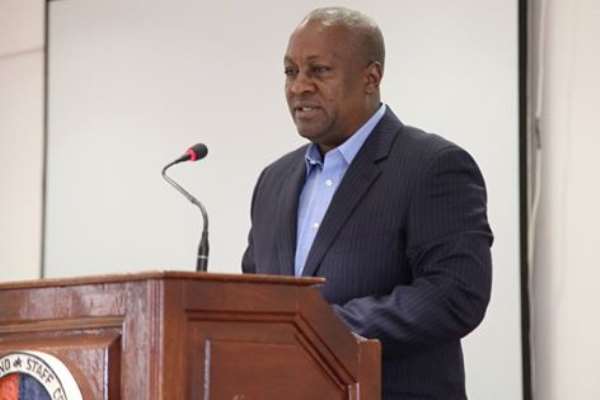 I skimmed through with an intense interest , a news article purporting to come from a transcendent Asante Chief, who per the content of the article, clearly appears unhappy about the NDC’s quick response to the Asantehene’s UN speech, and therefore challenging former President Mahama to rather come up with alternative policies and programmes to counter Akufo-Addo’s numerous and well-received poverty interventions such as the Free SHS, One District One Factory, One million per Constituency, One Village One Dam, Planting for Food and Jobs, Planting for Export and Rural Development, Rearing for Food and Jobs, National Builders Corp (NABCO), among others.

Let me first of all extend my absolute respect to the eminent Asante Chief for poignantly entreating the former president to come up with credible electioneering campaign message and put a stop to the needless criticisms.

But that said, even though former President Mahama hasn’t officially come up with 2020 electioneering campaign message, upon a critical assessment of his numerous pronouncements, we can invariably glean a cornucopia of feasible messages.

Let us therefore remind ourselves that it was former President Mahama who found it somewhat convenient to cancel the Teachers and Nurses Allowances while in office.

In fact, if you may remember, Ex-President Mahama vowed, somewhat unequivocally, not to restore the allowances, and that he would rather prefer to lose the 2016 general elections than to offer stipends to the Trainees.

Despite the countless supplications by the Trainee Teachers and Nurses, the former president decided to spurn their earnest pleas anyhow.

And, true to his word, a few months into his administration, President Akufo-Addo graciously restored the allowances to the utter delight of the Trainee Teachers and Nurses.

Dearest reader, what is Mahama’s message here then? Your guess is as good as mine.

It is also true that no less a person than Ex-President Mahama has conveniently and persistently been criticising Akufo-Addo for implementing the Free SHS policy, allegedly, at the expense of other developmental projects (see: ‘Free SHS crippling other sectors-Mahama, classfmonline.com/ghanaweb.com, 24/02/2018).

Dearest reader, what is the message here? Your guess is as good as mine.

Deductively, in fact, observers can draw and adverse inference from the preceding criticisms that Mahama does not fancy the Free SHS, and therefore he is not ready to spend huge amount of money to run the policy.