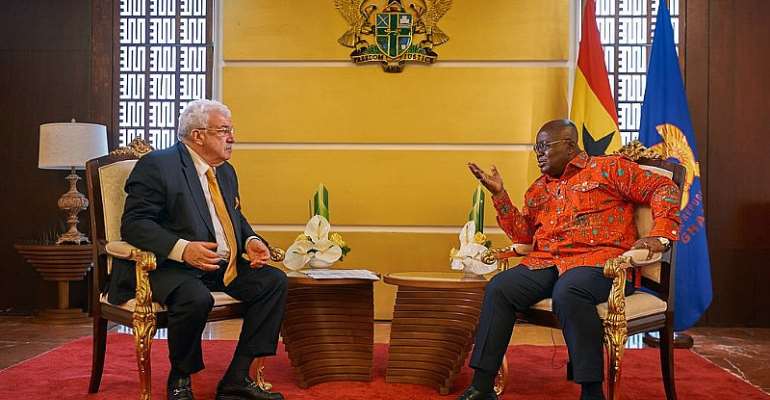 Acknowledging that Russia has been a strong, reliable and time-proven partner since the establishment of diplomatic relations with the Republic of Ghana, President of the Republic of Ghana, Nana Akufo-Addo, has passionately called on Moscow to support efforts aimed at creating of necessary conditions for sustainable development and for ensuring regional stability.

In an exclusive interview published by Itar-Tass News Agency, Akufo-Addo urged Moscow to get engaged in fostering peace in "trouble spots" of the African continent, and primarily those in the Economic Community of West African States (ECOWAS).

“We presume that settlement of conflicts in Africa requires attention and active support of the global community, and the creation of conditions for sustainable development. At the same time, Africans themselves must also be responsible for ensuring regional stability, he stressed.

Russia, the president added, could make a weighty contribution to the peace making process in Africa as well as contribute to the social and economic development in the African continent.

For the purposes of the promotion of mutually beneficial economic partnerships between Russia and Ghana, Akufo-Addo also said that the entire package of bilateral economic cooperation could be substantially reviewed, primarily the issues of trade and economic spheres with an emphasis on the fuel and energy sector, and measures of strengthening the contractual legal framework of relations.

He further said that Ghana, since the establishment of diplomatic relations, has been doing everything possible to revive relations with Russia. "We are striving to return relations between Ghana and Russia to a higher level, based on mutual benefit," he pointed out.

Akufo-Addo, however, reminded: “We have developed very good relations with the Soviet Union in the fields of education, culture and even in the military sphere. Many personnel in the first years of our independence were trained in the USSR: doctors, engineers.”

According to him, these people still represent "an important part of our society." “Since then, a certain decline has occurred in relations,” the president said. “But, at the moment we are doing everything possible to revive them in many areas where Ghana can benefit from cooperation with Russia.”

Ghana’s national companies have already negotiated for a large supply of liquefied natural gas with the Russian company Rosneft. “We welcome participation Russia in the development of our oil and gas industry and will support Russian investments in other sectors of our economy, "the Ghana’s Head of State concluded.

According to reports, during his tenure as Foreign Minister, Nana Akufo-Addo signed the Protocol on Consultations between the Foreign Ministries of the Russian Federation and the Republic of Ghana in July 2007. By Kester Kenn Klomegah.

Bawumia calls for greater unity, cooperation between Muslims...
7 seconds ago