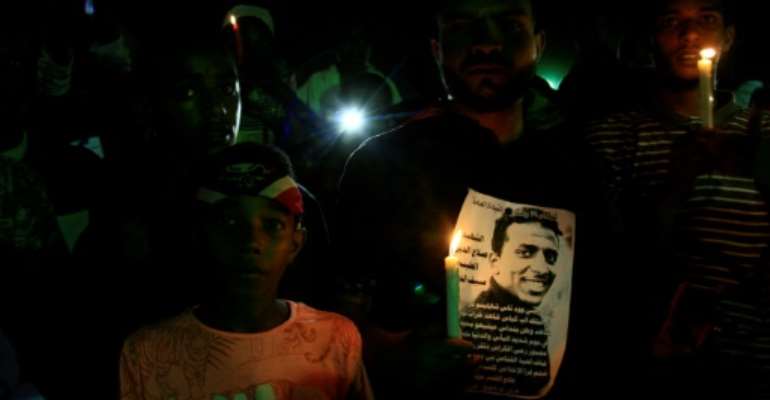 Sudanese protesters have staged vigils calling for justice for those killed on June 3. By EBRAHIM HAMID (AFP/File)

Sudan's new prime minister has formed a committee to probe an armed June crackdown on a weeks-long protest camp in Khartoum that killed and wounded hundreds of demonstrators, state media reported.

Shortly before dawn on June 3, gunmen in military fatigues raided the sit-in outside army headquarters in the capital, shooting and beating protesters in an operation that shocked international observers.

At least 127 demonstrators were killed and hundreds more wounded, according to doctors linked to the protest movement. Officials have given a lower death toll.

Despite military authorities carrying out an earlier investigation, the umbrella protest movement Forces of Freedom and Change had consistently demanded an independent probe into the crackdown.

Late on Saturday, the official SUNA news agency reported that Prime Minister Abdalla Hamdok had launched an "independent probe" into the crackdown.

It said Hamdok had formed a seven-member investigating team including representatives from the ministries of justice, interior, defence as well as independent members.

The committee will present its report within three months, SUNA reported.

"This is an independent committee formed according to what was mentioned in the constitutional declaration," SUNA said, referring to a power-sharing agreement between protest leaders and the previous ruling military council that was signed in August.

The consitutional declaration was signed after nearly eight months of protests -- initially against longtime autocrat Omar al-Bashir, who fell in April, then against the military council that took his place.

An earlier probe into the crackdown, conducted by the military council, had found that members of the country's feared paramilitary Rapid Support Forces, were involved in the crackdown, confirming accusations by protesters.

The military council has insisted it had not ordered the dispersal of the sit-in, but had ordered an operation including RSF members to clear up a nearby area.

A prosecutor who headed that probe revealed in July that an RSF general had separately ordered a colonel to disperse the sit-in, despite having no such order from further up the chain.