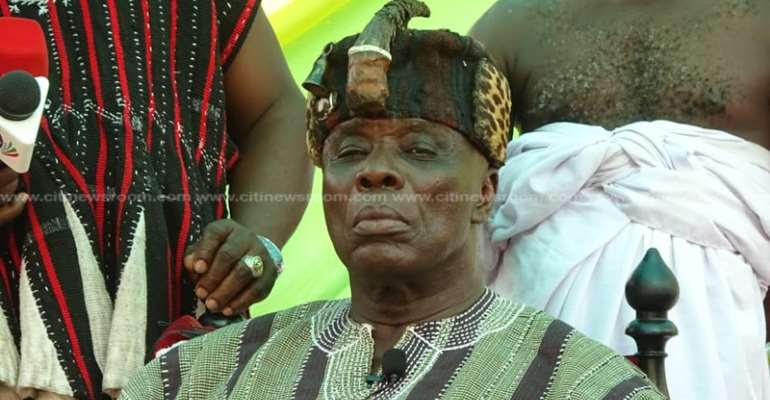 The overlord of Akyem Abuakwa Traditional Area, Okyehene Osagyefo Amoatia Ofori Panyin, has condemned individuals and groups who still engage in illegal mining in Akyem in the Eastern Region despite the negative consequence on the country’s land and water resources.

Areas such as Nsutam, Bunso, Kwabeng, Akrofufu and others are still inundated with  with activities of illegal mining despite the national ban on the act.

Addressing a gathering of chiefs and people of Nsutam as part of his royal tour to 16 Akyem towns to mark his 20th anniversary on the royal stool, Okyehene called on the people of Nsutam and adjourning communities to desist from galamsey and take advantage of governments flagship programs.

“There are no jobs in this community, however, engaging in illegal mining will do no good to our community. It will only destroy our vegetation. The president has placed a ban on the activity, but people are still engaging in the act. Nana Addo has introduced some good programs. Lets take advantage of it,” he said.

The Akyem areas in the Eastern Region is fraught with the challenge of illegal mining in most of its communities despite the campaigns against the practice.

Illegal mining in the country has been a topical issue in the country for the past few years sparking major campaigns and outrage by Ghanaians especially over the negative impact on the activities on water bodies and lands.

Citi FM led a campaign spanning many months with a petition to Parliament to demand among other things that the mining sector be sanitized.

The government, in taking action on the campaign constituted a joint police and military taskforce called Operation Vanguard, which was tasked to arrest and ensure prosecution of illegal small-scale miners in the country.

While some arrests were made, rumours are rife that the task force has been in the business of taking bribes and leaving out illegal-small scale miners, but the taskforce's commanders denied those claims insisting that the major problem with their work was the slow pace of prosecution and the lenient sanctions imposed on persons prosecuted.

The government has turned to the use of other different measures  in its quest to end illegal mining in the country and sanitize the sector.

It announced that it had introduced a software known as ' Galamstop ' to monitor mining concessions and the owners of the small-scale mining companies.