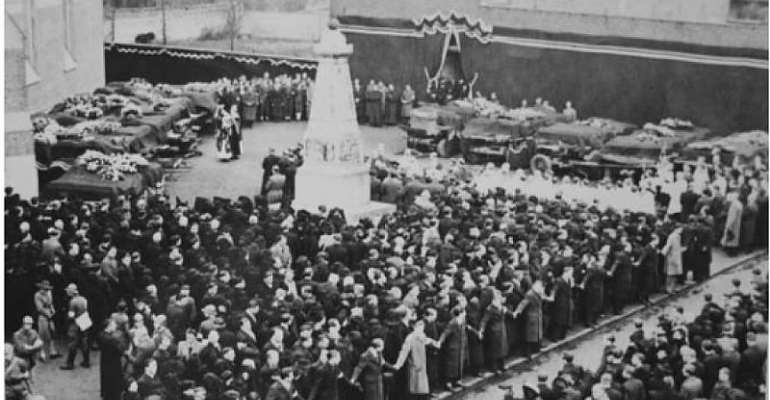 A former SS soldier who faced charges for incitement and disparaging the memory of Nazi victims has died aged 96, German prosecutors said Sunday.Karl Muenter had already previously been convicted in France over his role in the killing of 86 people in the northern French village of Ascq during World War II

Karl Muenter had already previously been convicted in France over his role in the killing of 86 people in the northern French village of Ascq during World War II.

German prosecutors filed the latest charges against him in July after he made inflammatory remarks in an interview broadcast on television in late 2018.

"I can confirm he has died" of natural causes, said Christina Pannek, a spokeswoman for the prosecutor's office in Hildesheim, Lower Saxony.

"The proceedings launched against him have therefore been halted," she added.

Muenter had told journalists in an interview broadcast by German channel ARD last November that those killed in Ascq were themselves to blame for their deaths.

He also disputed the fact that the Holocaust claimed the lives of six million Jews.

Muenter was 21 years old and a member of the Hitler Youth SS division on the night of April 1, 1944, when a train carrying some 50 soldiers of the division was slightly derailed by an explosion in an act of sabotage by the Resistance.

The troops took revenge by shooting dead 86 men in the nearby village of Ascq, the youngest of whom was 15 years old.

Muenter has already had several run-ins with the courts over his past in the SS.

He was sentenced to death in absentia by a French military tribunal in 1949 for his role in the Ascq mass killing but was pardoned in 1955 as part of French-German reconciliation efforts after World War II.

German prosecutors had sought to reopen the war crime case on his home soil but dropped the case against him in March last year because of his prior conviction in France -- under a legal principle known as double jeopardy.

Bawumia calls for greater unity, cooperation between Muslims...
58 minutes ago