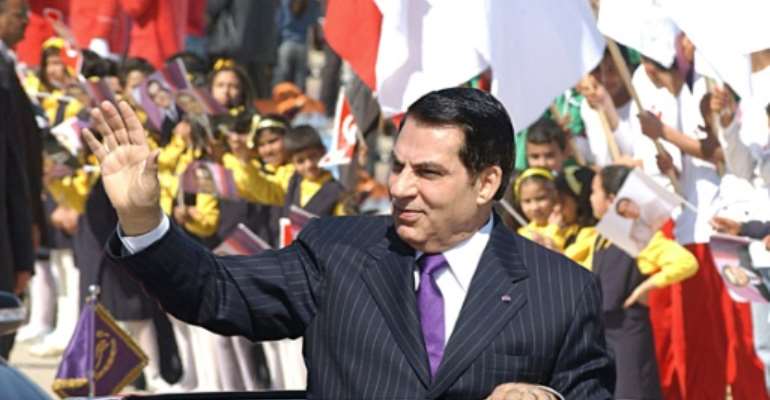 During more than two decades of iron-fisted rule, Tunisian president Zine El Abidine Ben Ali and his clan took control of 220 businesses that hoovered up more than a fifth of all private sector profits, according to the World Bank. By Handout (AFP/File)

With the burial in Saudi exile Saturday of former president Zine El Abidine Ben Ali, Tunisia is turning the page on more than two decades of nepotism and repression with a large dose of indifference.

Forced out of Tunisia on January 14, 2011, by weeks of popular outrage spurred by the self-immolation of a market trader protesting police harassment and unemployment, Ben Ali died on Thursday in the Saudi city of Jeddah.

His death did not feature especially heavily either in the news or the conversations of ordinary Tunisians, in a country that is in the midst of elections.

Reflecting the pluralism that has emerged since Ben Ali's downfall, two non-establishment candidates made it through the first round of a presidential poll held on Sunday -- one a socially conservative academic committed to radical decentralisation of power, the other a populist media magnate currently behind bars.

The funeral of the former president is to take place in the Muslim holy city of Medina in Saudi Arabia on Saturday, according to a small notice published in La Presse newspaper.

Some of his family will receive condolences on Sunday in an upmarket suburb of Tunis.

The ex-leader's wife, Leila Trabesli, who has led a comfortable and discreet life in exile with daughters Nesrine and Halima -- along with son Mohamed -- has little incentive to return home.

She faces heavy sentences for embezzlement, alongside possession of weapons, drugs and archaeological artefacts.

Ben Ali himself was sentenced several times to life in prison, including for the bloody suppression of protests in the last weeks of his autocratic rule, which killed more than 300 people.

"The second president of the Tunisian republic henceforth belongs to history, and history will judge him", said his Lebanese lawyer Akram Azouri.

Several trials are ongoing, notably under the auspices of the Truth and Dignity Commission, which is mandated to shine a light on violations committed between 1955 and 2013.

The commission has collected witness testimony, documents and information from official archives so that those implicated in serious abuses can be judged by special courts.

Fourteen public hearings have meanwhile brought a measure of closure for relatives of the disappeared.

They have also seen public testimony on the network of corruption established by Ben Ali's nephew, Imed Trabelsi, who was a pillar of the regime.

The extended family of Ben Ali's hated wife captured vast swathes of the economy, as detailed by the World Bank in a 2014 report.

The global lender said that by the end of 2010, the 114 people who comprised the Ben Ali clan controlled 220 businesses that hoovered up more than a fifth of all private sector profits.

When he was forced from power, hundreds of businesses and properties, along with luxury cars and jewellery hoarded by the Ben Ali family, were impounded through a state holding company.

The Tunisian state is still far from retrieving all of the pillaged funds.

After a difficult start, Karama has sold around two billion dinars (600 million euros) of stakes in private enterprises since 2011, with a quarter of this sum realised last year, according to the holding firm's CEO.

It has been difficult to find buyers for some of the seized companies, which include heavily indebted enterprises.

One highly visible symbol of the rot that set in under Ben Ali is a collection of rusting yachts gathered at the port of Sidi Bou Said.

Luxury cars and even a camper van, offered for sale last year, have failed to garner interest.

Persistent social and economic problems have fed nostalgia in some quarters for the Ben Ali era but that is a limited phenomenon.

Abir Moussi, the only candidate to overtly defend the record of Ben Ali's former ruling party, came a distant ninth in last Sunday's presidential election first round with four percent of the vote.

[Hot Video] Shatta Wale vim dies as prisoners hoot at him in...
59 minutes ago