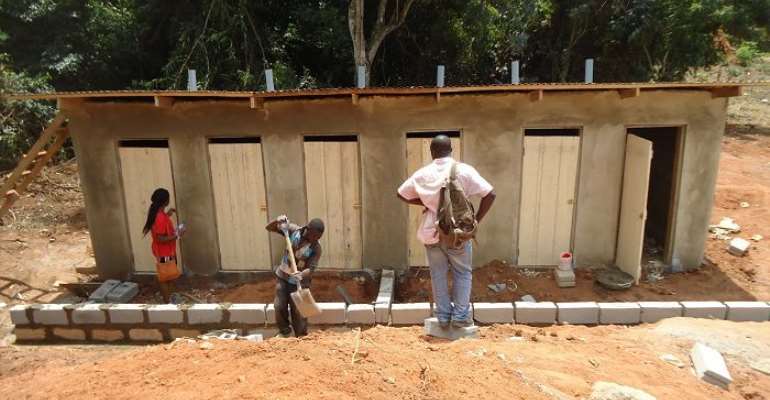 Residents of Suhum have kicked against a decision by the municipal assembly to hand out a community meeting place for the construction of a public lavatory.

They accused Ms Dankwa Darko and Mr Cudjoe of being behind the move to waste the only venue for social events for the people.

Traditional leaders
The air of disapproval has, indeed, become widespread now after some opinion leaders in the community publicly spoke against the intention and siting of the toilet facility.

In an interview with the Daily Graphic, the Krontihene of Obretema, a suburb of Suhum, Nana Baffour Sakyi, said the decision to use the field was an act of disrespect, and demanded that the public toilet be relocated to another site.

“We are not saying they should not build the facility, but to use the field for such a purpose is not the best. The field is our only social ground where we hold funerals and durbars,” he said.

“We are the leaders of the community and for you to decide to use our land, you need to consult us and not disregard us and do what you want. The assembly member and the traditional leaders have been at loggerheads for long and it is not good for the community,” he added.

He said the attempts to convince the MCE and the assembly member to relocate the project had proven almost futile.

“Our attempt to convince the MCE and the assembly member has not yielded good result. The structure on the field was demolished by the assemblyman and he is actually preparing the ground to construct the public toilet. The land belongs to the Okyenhene, Osagyefuo Amoatia Ofori Panin II; he is the ultimate authority, not the assembly member nor the MCE,” he added.

Also venting his frustration, the Asafohene, William Ayeh Okai, said they were forced to show their anger because of the assembly member’s indifference to their call.

“We have asked the project to be moved from the site, but the assembly member will not budge. This has forced the youth and the opinion leaders to show their total disapproval. Building a public toilet will help the residents, but you do not solve a problem by creating another one. As a leader, you must find the right balance,” he said.

Reaction
Mr Cudjoe, who was invited by the Kyebi Divisional Police Command over the development, told the Daily Graphic he would not discuss the matter.

He, however, expressed the feeling that he had been “mistreated” by the traditional authorities who reported him to the police.

The Daily Graphic could, however, not reach the MCE for comment.