West Gonja Catholic Hospital To Be Closed Down Over Industrial Strike 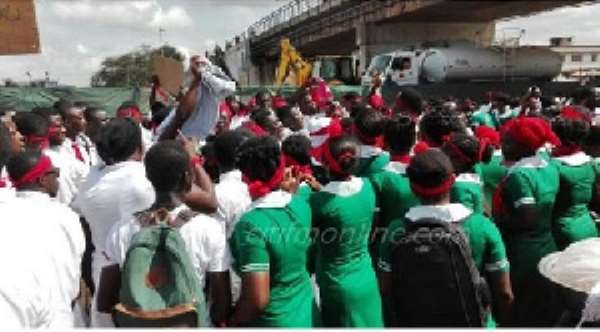 The West Gonja Catholic Hospital in Damongo, the Savannah Regional is likely to be closed down today following an industrial strike by staff nurses.

This was after scores of patients were stranded at the hospital in the course of a sit-down strike embarked by nurses yesterday Friday 20th September 2019.

The industrial strike was to cause the administrator and the matron of the hospital to step down immediately before the committee of enquiry into the West Gonja Impasse commence sittings over allegations against the duo.

The nurses at the West Gonja Hospital, Damongo say an earlier strike was suspended due to an agreement reached between the nurses and management on 11th July 2019.

A statement signed by Abdul Karim Issah, Chairman of the Ghana Registered Nurses and Midwives Association at the West Gonja Hospital, Damongo said: "Management of the hospital promised to meet our demands which made us suspend an earlier strike on 11th July 2019."

However it came to light that they were still at post overseeing official duties.

In an interview with Public Relations Officer for the group, he noted that, “ the strike still continuous and in-patients will be discharged today for a total closure of the facility.”

Among the allegations the nurses claim they've been denied promotion in the hospital with management failing to meet their demands of a 10% increase in salaries and other allowances as promised.

They also raised the issue of denial of study leave by management of the hospital with worries that management sees no relevance in the course of study chosen by the staff to the hospital.

The two stepped aside but the nurses are alleging that documents of the facility are still signed by them with the hospital official vehicle still in the possession of the administrator.

The nurses at the West Gonja Hospital sees the act to be an attempt by management of the hospital to stifle career choices and progression of staff of the hospital.

Meanwhile, the Nurses has assured stakeholders, the general public and clients of their continuous care especially maternal and child health cases as well as emergencies.