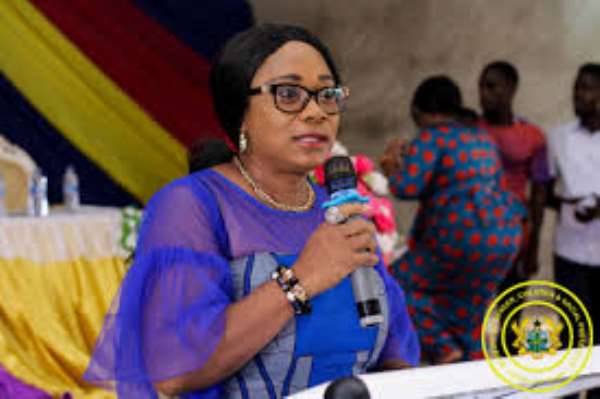 The Minister for Gender, Children and Social Protection, Cynthia Mamle Morrison has kick-started a new campaign to promote the consumption of ‘gari’ and ‘konkonte’, local foods made from processed cassava.

The Minister’s campaign started at Asiakwa in the Abuakwa South Municipality of the Eastern Region where she joined caterers of the Ghana School Feeding Programme (GSFP) in a cooking demonstration using ‘gari’ to prepare nutritious ‘gari-fotoh’ (a blend of gari with stew).

She also thought them how to use the local rice to prepare ‘jollof’ and ‘wakye’.

The food was served to over 1,500 pupils drawn from the Salvation Amy Basic, Asiakwa Methodist, Asiakwa Presby and Asiakwa R/C primary schools.

Speaking later at a durbar of chiefs and people, the Minister for Gender also the Member of Parliament for Agona West disabused the minds of some influential parents who despise or see ‘gari’ as a food for only the poor.

She said “there is the need for Ghanaians to develop good taste for our local foods like ‘gari’ and ‘konkonte’ made from cassava, which can commonly be found in every community and is much affordable”. She said that there are reported cases of most students being underserved because caterers are unable to buy the right quantity of rice and yam at a high cost.

Mrs. Morrison indicated that there is nothing wrong with students being served with ‘gari’ at the Senior High School or under the School Feeding Programme. But the Minister was quick to add that the meal must be nutritiously served.

She said one of the concepts of the Ghana School Feeding Programme is to promote the use of local crops by caterers in order to improve the local economy and reduce poverty among farmers.

However, unlike Nigeria and other African countries where ‘gari’ is a chiefly food served in many homes, school, at parties, weddings, funerals and at other social gatherings, Ghana has not been able to turn ‘gari’ or cassava into an important food.

The Minister noted that the Senior High Schools and the caterers of the Ghana School Feeding Programme could save a lot of money if they will take their food supply from the local farmers and stop patronizing the imported goods.

The Acting National Coordinator of GSFP, Mrs. Gertrude Quashigah commended the Minister for taking time off her busy schedules to impact the caterers with new cooking methods.

She noted that the Government was much concerned about the School Feeding since it affects the lives of over 2.6 million deprived pupils.

Mrs. Quashigah urged the caterers to adhere to the required standards of preparing meals for the pupils, as Government also makes efforts to clear their nine days outstanding debt for the last quarter of 2018/2019 academic year.

The Mankrado of Asiakwa, Nana Okyere Gyawu expressed appreciation to the Government and the Ministry of Gender, Children and Social Protection for sustaining the GSFP of which his community is a huge beneficiary.

The Queen Mother of Asiakwa, Nsutam, Masse Dokyi, Nana Akua Kwayowae I appealed to Mrs. Cynthia Mamle Morrison to help the community and the Abuakwa South Municipality in general to fight the issue of teenage pregnancy among most primary, junior high and senior high school students.