Asantehene celebrates ‘Awukudae’ In the USA 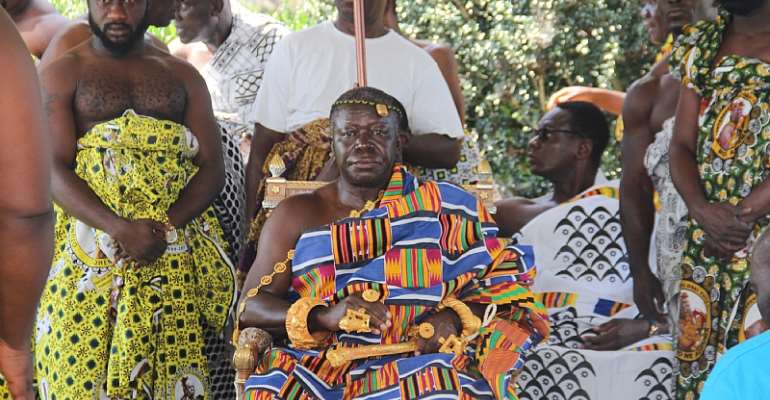 Awukudae Festival (meaning: "Wednesday ceremony", is a traditional Ashanti festival on the Asante traditional calendar, celebrated on Wednesdays nine times in a year in 42- day intervals..

The celebration was significant because it showcased the Asante culture and tradition and also enabled Ghanaians in the diaspora to experience the splendor of the monarchy.

The supplication of the spirits of the ancestors and the provision of offerings for the shrines for the blessing of the Asante kingdom occupies the significant theme of the festival.

On Wednesday, September 18, 2019, hundreds of Ghanaians including chiefs from various vicinities in the United States of America converged in the State of Maryland to pay homage to the Asante monarch, Otumfuo Osei Tutu II.

As part of the usual courtesies, some of them presented gifts and drinks to the Asantehene to express their appreciation for his stewardship.

Otumfuo Osei Tutu II entreated the gathering to unite for the common good of their communities, Asanteman and Ghana as a whole. He charged the chiefs that it was their responsibility to preserve the traditions and cultural values of Asanteman and to also provide the right leadership to bring development to their communities.

He said even though he was invited to speak at the United Nations he saw the need to meet and engage the Ghanaian Community and give them an overview of what he came to accomplish in the United States. The King expressed the hope that his visit would be meaning in tapping the needed resources for Ghana. He expressed love for all and asserted that unity and truth are his hallmark. The King said he is neutral in political activities and that what he is committed to a lasting peace for Ghana. He urged all Ghanaians to contribute their quota towards the development of Ghana by supporting the education of children of school-going age, developmental projects including the provision of good drinking water in various communities. He also expressed his appreciation to all Ghanaians for joining him in the celebration. Otumfuo finally admonished all disputing parties in the Asanteman Association disputes across the United States to forge unity by coming together as one strong body.

During the period of the Asante Monarchs visit to the United States, he has settled all disputes amongst the various Asanteman Associations and has put structures in place to sustain a lasting peace.

Whilst in the United States on an Official visit His Royal had several high profile engagements including a meeting at the world bank, addressed the African Union at the Washington DC Mission and delivered a speech on the Culture of Peace at the United Nations General Assembly High-Level Forum of the 25th Anniversary of the Adoption of the Declaration and Program of Action in New York.

The Asantehene's speech to the United Nations Assembly was on his ability to use traditional methods and culture to ensure peace in the Ashanti Region and Ghana.

Gathering Of Chiefs And Queenmothers