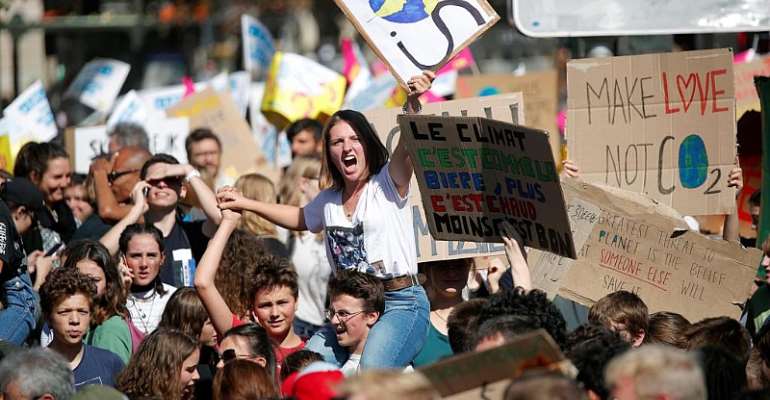 Yelling slogans and waving placards, protesters, young and old, took to the streets of France for a third time this year, demanding world leaders wake up to the threat of climate change.

Chanting: "1,2,3 degrees, is a crime against humanity," activists and environmental groups gathered on Friday at place de la Nation in south-eastern Paris, to urge nations to keep temperatures from rising to dangerous levels.

Perched on top of a massive statue representing the Triumph of the French Republic, with a woman at its helm,some demonstrators held banners reading 'Mother Earth is dying,' and 'We must act now.'

Organisers say around 30,000 people in France joined a global strike against climate change, heeding the rallying cry of the Swedish 16-year-old activist Greta Thunberg. Officials put the number to just under 10,000.

The figures may be a matter of debate. But the threat of climate change is not, said 16-year-old American student Ellington.

"I know that things are going wrong in the world right now and I know that this is part of the future I'm going to be a part of. I want to do something about it," he told RFI.

Thunberg has repeatedly accused leaders of not doing enough to prevent the harmful effects of climate change, which has led to ice sheets melting in Greenland and destroyed forests in the Amazon.

Solutions ignored
It is not just the Amazon which is burning but Bangladesh too, said activist Rakibul Islam.

"Bangladesh is also facing deforestation. Corporate groups are razing our land for profit. We want to tell the government they should stop this nonsense and save our mango forests," he told RFI.

Despite a year of weekly protests, the planet is still getting warmer. July 2019 was the hottest month on record.

For 20-year-old student Melanie Luce, the options were stark. "There is no point in going to class, if we have no future ahead of us," she said.

In her opinion, solutions exist, yet are being ignored.

"The French government promised to ban glyphosate within three years and nothing has happened. The same goes for pesticides. European countries were supposed to ban them and still haven't done so," she added.

Sluggish record
Clemence Dubois, from the NGO 350.org, which was behind Friday's march, says that French people are tired of the government's empty words.

"President Macron talks a lot about climate action and he received an award for being a champion of the Earth but emissions are still rising," she said.

Spurred by what they see as a sluggish, ineffectual response to the existential threat of global warming, demonstrators are hoping Friday's climate strikes will put enough pressure on world leaders who gather at the United Nations in New York on Monday for a climate summit.

"We don't have time to wait for the next elections. Day by day we are going to hold leaders to account."