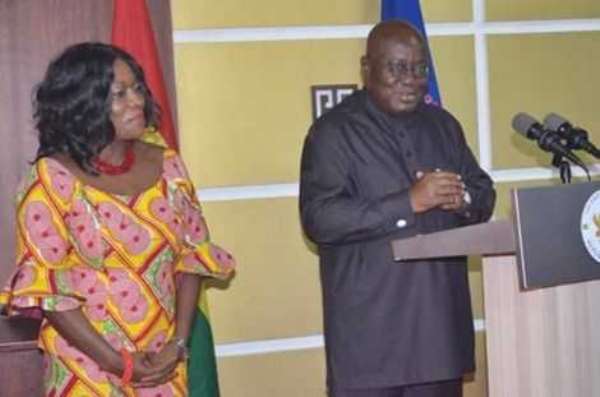 The Senior Minister, Mr. Yaw Osafo Maafo has pleaded with the chiefs and people of Evalue-Ajomoro Gwira Constituency in the Western Region to retain President Akufo-Addo in the upcoming 2020 general elections.

He also appealed to them to vote massively for the sitting Member of Parliament for the area, Catherine Afeku to bring more developmental projects to the area.

Mr. Osafo Maafo made this appeal on Saturday, September 14, 2019, when he delivered a speech as a special guest of honour at the Kundum Festival of the chiefs and people of the Axim Traditional Area.

He noted that the development of the area is dear to the Akufo-Addo-led government who is poised to better the lives of the locals.

The Senior Minister stressed that government was going to develop community mining in five communities in the northern part of the Municipality to create job opportunities for the teeming unemployed youth.

"We are bringing Community Mining in five areas in the Nzema East Municipality thus; Gwira Kutukrom Gwira Banso, Gwira Eshiem, Gwira Bamianko and Gwira Tumantu. Government is poised to do Small Scale Mining to preserve the land and create job opportunities for the youth", he emphasised.

He assured the gathering that the contractor would begin work on the Axim Fishing Harbour.

The Senior Minister said Catherine Afeku has contributed immensely towards these developmental projects in the area.

According to him, the lawmaker was a wise person and a very lobbyist woman who is hard-working and a humble servant.

"Please Nananom, in 2020, let your people elect Catherine Afeku again for us, because she is a very hard-working MP and Minister", he added.

He used the occasion to call on the people to support the Referendum of Metropolitan, Municipal and District Chief Executives (MMDCEs) and recommended the current MCE to them and said they should elect him to partner Catherine Afeku to develop the Municipality.

On his part, the Paramount Chief of Lower Axim Traditional Council, Awulae Attibrukusu III, pleaded with the Akufo-Addo-led government to as matter of urgency build an ultra-modern theatre for the Axim Government Hospital to save lives.

Axim Government Hospital was established in 1925 and currently serves a total population of 75,105, but has a limited bed capacity of 89.

The hospital was next to Effia Nkwanta Regional Hospital in the 80's and 90's but now can be counted among the least developed hospitals in the region due to inadequate infrastructure and equipment to address its operational duties.

The Paramount Chief thanked the Senior Minister for honouring their invitation to climax the festival and urged him to send their appeal to President Akufo-Addo to come to their aid as soon as possible.

The festival which is celebrated by the Ahantas and Nzema people of the Western Region, is an occasion to render Thanksgiving to God for abundance of food at the end of the harvest period.

This year's celebration was on the theme, "Promoting our traditional values through Tourism, Arts and Culture".