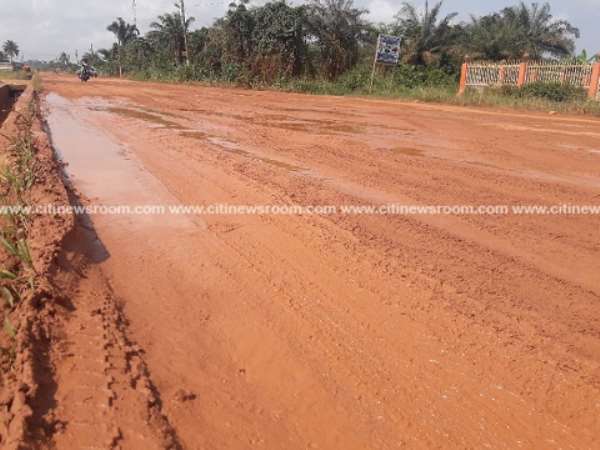 The Chiefs and people of Nkroful, the hometown of the first President of the Republic of Ghana, Dr. Kwame Nkrumah in Ellembelle District of Western Region are celebrating the birthday of their great son with very deplorable road network in the town.

This was made known after a surprised visit to the town by this reporter on Thursday, September 19, 2019 ahead of preparations towards this year's celebration of Dr. Kwame Nkrumah's birthday slated for September 21, 2019.

Kwame Nkrumah was born on September 21, 1909 in Nkroful, then Gold Coast to a poor and illiterate family.

Nkroful was a small village in the Nzema area, in the far southwest of the Gold Coast, close to the frontier with the French colony of Ivory Coast.

His father did not live with the family, but worked in Half Assini where he pursued his goldsmith business until his death.

Kwame Nkrumah was raised by his mother and his extended family, who lived together in traditional fashion, with more distant relatives often visiting.

He was the first prime minister and president of Ghana, having led the nation to independence from British colonial masters in 1957.

An influential advocate of Pan-Africanism, Nkrumah was a founding member of the Organization of African Unity and winner of the Lenin Peace Prize in 1962.

The Esiama-Nkroful road in the Ellembelle District has been in terrible shape for many years despite promises by successive governments to fix it.

The current state of the road has not only affected social and economic activities in Ellembelle but activities of companies operating in the District.

It would be recalled that the District Chief Executive for the area, Hon. Kwasi Bonzoh told local newsmen that President Akufo-Addo was going to cut sod for reconstruction of the deplorable Esiama-Nkroful-Aiyinasi road on Tuesday, July 23, 2019.

This promise made, gave happiness to the Chiefs and people, but the President came to Ellembelle only to commission the multi-billion dollar Ghana Gas Operational Headquarters at A.B Bokazo.

This failed promise made by the DCE, gave room for some people to ridicule President Akufo-Addo's Government.

A month ago, the chiefs and people of Ellembelle threatened to demonstrate against the government for failing to honour its promises but the DCE intervened and the demonstration was suspended.

The DCE then disclosed to the gathering that a contractor was on the road hence the suspension of the demonstration.

But this reporter can authentically report that there is no construction been done on the road whilst the ceremonial road continues to deteriorate each and every day.

In a video interview with a resident who is also a driver, Paul Attabia, he could not fathom why the road that leads to the hometown of Ghana's first president should be in that terrible state for so many years.

He therefore expressed worry that over the years, the area has been neglected by successive governments.

The angry resident said Dr. Kwame Nkrumah fought for independence of this country and therefore needed to be recognized as a hero. Unfortunately, he said his hometown was underdeveloped, hence making the youth highly disappointed in successive governments.

He added that all the past and present Heads of States have had the roads leading to their home towns in motorable shape with the exception of Dr. Kwame Nkrumah's home town.

He didn't spare the DCE for always lying to them to get the road fixed.

"I don't want to talk about our DCE because he is a failure, he has always promised us he would fix the Nkroful road since he assumed office as our DCE, .

So far, he has made more than three promises of fixing the road, but still nothing has been done on it and I hope you were coming from Esiama, you saw the road yourself, very very terrible and very pathetic.

This is the route all foodstuffs pass through to the cities, and this is the hometown of Kwame Nkrumah.

The NDC government also promised us they would fix it and failed. What pains me a lot is the current DCE who always uses this road to work, so he doesn't see that the road is not good, what crime has Kwame Nkrumah committed, this road must be fixed", he fired.

"We are celebrating the birthday of Dr. Kwame Nkrumah and see the road, at least our leaders could have fixed this eight-kilometre to honour our great man, we are very disappointed in successive governments for failing to fix that after the former MP, now national chairman of NPP Freddie Blay fixed it many years ago", he added.

He, therefore seized the opportunity to appeal to President Akufo-Addo to officially come and cut sod for construction of the road to ease vehicular movement and as a sign of recognition of Dr. Kwame Nkrumah.

On his part, a trader, Mr. Emmanuel Ackah, said the road was given them problem, adding that the means of transport used for their activities were motorbikes.

He stated that if this current government failed to fix the road for them before 2020 general elections, then they would not vote.

On Monday the chiefs and people of the area organised a communal labour exercise to clean the principal streets ahead of the D-day.

The chiefs together with some politicians, religious leaders, will hold a public lecture on Saturday, September 21, 2019 to talk about some of the achievements of Dr. Kwame Nkrumah.

The Convention People's Party (CPP) is also expected to hold a public forum on Monday, September 23, 2019 which has been declared as a public holiday by the government.