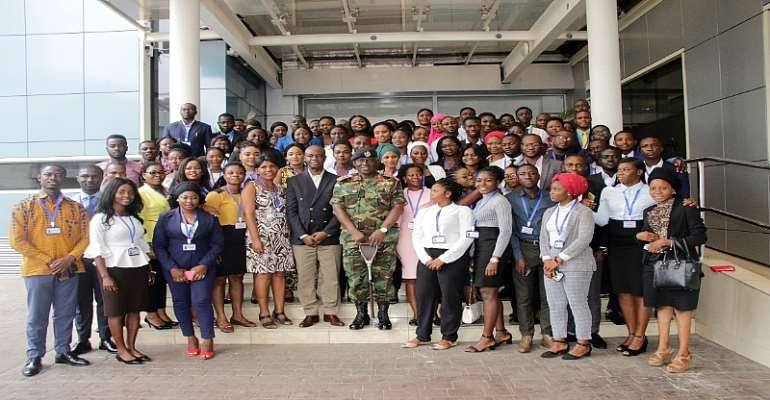 The National Communication Authority (NCA) on Thursday, 19th September, 2019, held a motivational session for the 2019/2020 National Service Personnel (NSP) posted to the Authority. The Chief of Defence Staff (CDS), Lt. General Obed Akwa, was the main speaker at the event.

In his welcome address, the Director General of the NCA, Mr. Joe Anokye, expressed his gratitude to the CDS for agreeing to support the Authority in preparing the NSP for working in the corporate environment. He further assured the NSP of the Authority’s readiness to ensure their success during their stay at the NCA.

Lt. Gen. Obed Akwa, in his speech, commended the NCA for the training it provides the youth especially those who have been attached to the Authority for their national service period.

He said, ‘’The records show that in 2016, the Authority accepted 35 NSP and this figure has increased exponentially by 500% in the past three years: 168 in 2017, 118 in 2018nand 176 for the current year. This gesture by the NCA to support the National Service Scheme is worthy of commendation in view of the positive impact it has on mobilizing and engaging the youth in productive activities that will benefit and shape them for life after their national service.’’

Giving tips he called ‘’the Golden Nuggets’’, the Chief of Defence Staff noted that ‘‘the greatest enemy to learning is knowing’’.

Lt. Gen. Obed Akwa closed his session by posing the question, ‘’If what I am about to do becomes public knowledge, would I be proud of it?’’ as a way of admonishing the personnel to value integrity in their actions.

The NSP had the opportunity to engage with Lt. Gen. Obed Akwa, asking relevant and pertinent questions relating to career building.

This followed a similar engagement last week when the Bootcamp for the 2018/2020 NSPs posted to the NCA was inaugurated. At the inauguration was Mrs. Tiwaa Addo-Danquah, Director General of the Ghana Police Service who was the Special Guest of Honour.