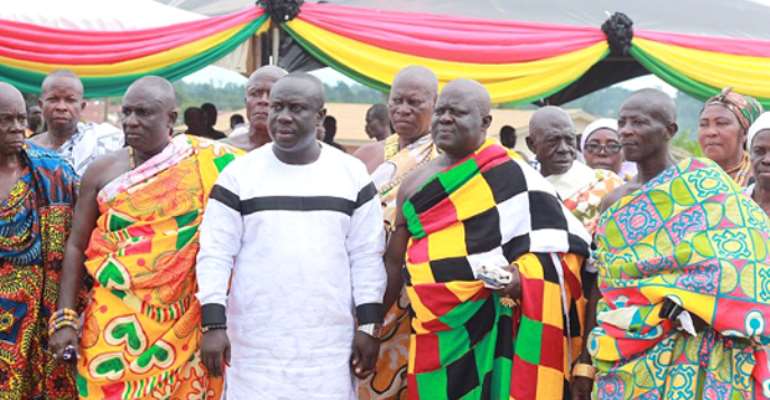 A group calling themselves Asuom Youth Association (AYA) has petitioned the Okyenhene, Osagyefuo Amoatia Ofori Panin, over some chieftancy issues that are looming in the area, bad roads and cases of insecurity in the community.

The petition, which was jointly signed by the National President of AYA, Mr. Maxwell Atuanor Dwirah and the General Secretary, Rev. Daniel Kwasi Opoku, was delivered to the Okyenhene at a two-day durbar held in his honour during his 20th Anniversary royal tour to the chiefs and people of Akyem Asuom in the Kwaebibirem Municipality, on Saturday and Sunday, 14th and 15th of September, 2019.

The group called on the Okyenhene to urgently intervene to avert the potential chieftancy crisis for the search of the rightful successor to the late Asuom Asona Abusuapanyin Brobbey, who passed on recently.

The petition also mentioned the bad roads and security situation in the area.

“Your Royal Majesty, we are very sad about the bad roads you used when coming to Asuom from Kade. We want to plead with you to use your high office to speak to the President of Ghana and the Minister of Roads and Highways, to as a matter of urgency, see to the construction of our roads. We know you have always shown interest in the roads in your kingdom, as you have had the first-hand experience of the deplorable state of the Kade to Asuom road, we are pleading with you to reiterate it to the powers that be,” the petition said.

Copies of the petition were also given to the Chief of Asuom, Osabarima Ofosuhene Apenteng II, Member of Parliament (MP) for Tema West and a royal native of Asuom, Carlos Kingsley Ahenkorah, MP for Kade, Kwabena Tenase and the Municipal Chief Executive for the Kwaebibirem Municipality, Seth Antwi Boasiako.