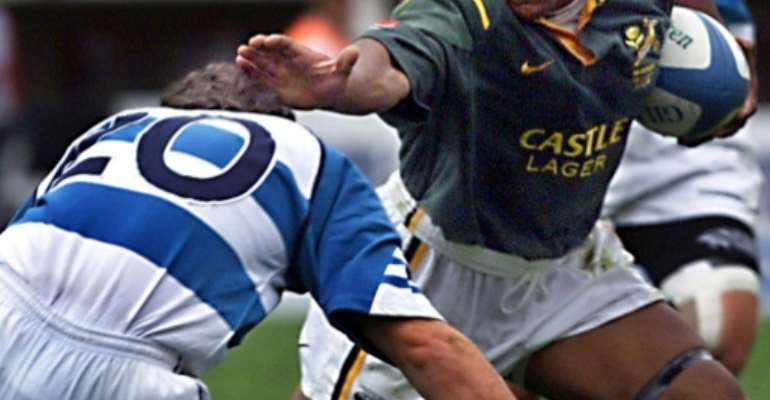 Chester Williams in his prime. By FABIAN GREDILLAS (AFP/File)

The Springboks are to pay homage to late 1995 World Cup winner Chester Williams with his image printed on their jerseys for their tournament opener against New Zealand on Saturday.

"He is really inspirational to all of us as a team," captain Siya Kolisi said Friday of the star winger who died of a heart attack at the age of 49 earlier this month.

Williams was the only black player in the World Cup-winning side that defeated rivals New Zealand 15-12 after extra time in South Africa 24 years ago.

He died less than two months after the death of James Small, another winger in the champion side.

Kolisi, the first black player to captain the Springboks, said: "We look up to the team of 1995 because we feel like they changed things for us in South Africa. We will always respect them.

"It was an era that opened up doors for us. We really appreciate all of them, and with the passing of James Small, we had him on the back as well against Australia."

"Chester didn't like being the centre of attention," Erasmus said.

"He never bragged about his role or expected anything for it but he would have enjoyed being part of a Springbok vs All Blacks Test match once more, I think."

LGBTQI+ debate: Be tolerant of each others views — Akufo-Add...
38 minutes ago