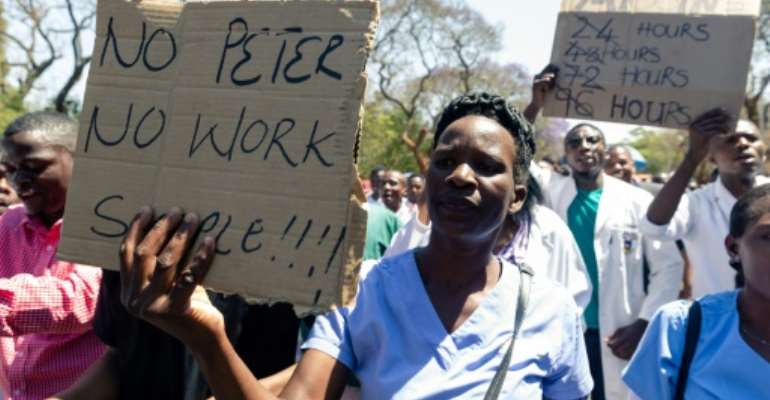 Demonstrators earlier this week chanted 'No Peter, no work'. By Jekesai NJIKIZANA (AFP/File)

Peter Magombeyi had been missing since Saturday night, with his Zimbabwe Hospital Doctors Association (ZHDA) saying he was taken because of his role in organising strikes to demand better pay and working conditions.

HRW Southern Africa Director Dewa Mavhinga told AFP that Magombeyi had "made contact by phone, he is alive", adding that a team of lawyers and doctors was travelling to pick him up from Nyabira, some 30 kilometres (20 miles) north of the capital.

Allan Domingo of ZHDA said Magombeyi had called and "he said he was scared and sounded disorientated".

Hundreds of medical staff have staged protests this week to demand the authorities investigate the disappearance.

Demonstrators on Monday chanted "No Peter, no work".

Government spokesman Nick Mangwana said earlier this week that the administration had "no reason" to abduct citizens.

Doctors are paid less than $200 (180 euros) per month in Zimbabwe -- a country still struggling with hyperinflation and shortages of fuel and food after decades of economic crisis under former president Robert Mugabe, who died earlier this month.