Malawi needs to ratify the AfCFTA as soon as possible says Ministry of Industry, Trade and Tourism Representative 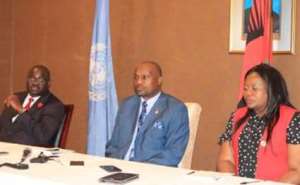 Lilongwe, Malawi, 18 September 2019 – The Ministry of Industry, Trade and Tourism, in partnership with the Economic Commission for Africa and the African Union Commission (AUC) held an AfCFTA Sensitization Workshop in Lilongwe on Tuesday 17 September. This workshop brought together approximately 100 participants from the private sector, civil society organizations, government and academia. The purpose of the workshop was to promote dialogue and develop a better understanding of the AfCFTA, as well as, secure consensus for Malawi to ratify the AfCFTA Agreement.

In his official opening remarks, Dr. Joseph Mkandawire, Director of Administration and Finance, Ministry of Industry, Trade and Tourism, delivered a speech on behalf of Salim Bagus, Minister of Industry, Trade and Tourism, in which he urged the Private Sector "to be proactive in seizing every opportunity availed by the AfCFTA as it offers a huge market for Malawian products." He further noted that it is "time to start making necessary adjustments to production processes in the manufacturing sector to adapt to AfCFTA demand in the shortest period possible, thereby benefiting from first-mover advantages. It is only when we are aggressive that we will be able to grow this economy. This reasoning justifies why Malawi needs to ratify the Agreement as soon as possible."

Said Adejumobi, ECA Regional Director for Southern Africa outlined some of the critical reforms needed in Malawi to ensure that industrialization, investment and trade generate optimum benefits for Malawi. Including working on "areas of trade facilitation, infrastructure development, doing business reforms to create a better conducive environment for the private sector, product quality and standards. As well as the general policy environment, its consistency, clarity and stability to support the development of a competitive industrial sector able to capture opportunities arising from a borderless trade continent."

The AfCFTA ushers in a new era of development, with its main objectives being to create a continental market for goods and services, enhance competitiveness at the industry and enterprise level through opportunities for scale production, continental market access and better reallocation of resources. This would promote intra-Africa trade and address the issues of poverty and employment on the continent.

Malawi is set to benefit from: ·An expanded market, since the AfCFTA is expected to bring together 55 African countries with a combined population of more than 1.2 billion people, including a growing middle class, and a combined gross domestic product of more than US$3.4 trillion;

·Harmonization of systems. When the AfCFTA expands intra-African trade through better alignment and coordination of trade liberalization, facilitation and instruments across Regional Economic Communities (RECs) and Africa as a whole;

· Economies of scale through enhanced competitiveness at industry and enterprise-level through continental market access and better allocation of resources;

·Improvements to the value chain, since a fully implemented AfCFTA, will create opportunities to establish regional and global value chains and promote industrial development; and

·The attraction of FDI and infrastructure development, because an integrated market will make it easier and more cost-effective to trade across the continent as well as attract FDI for much-needed infrastructure projects. Additionally, the AfCFTA is expected to facilitate intra-African trade by making cross border trade easier, simpler and less costly.

The workshop is part of a more comprehensive project aimed at deepening Africa's trade integration through effective implementation of the AfCFTA. Financially supported by the European Union, the ECA has been working with its partners including the African Union Commission (AUC), International Trade Centre (ITC), United Nations Conference on Trade and Development (UNCTAD) and a selection of independent trade experts to ensure effective AfCFTA implementation strategies and building national consensus to support the implementation of the AfCFTA.