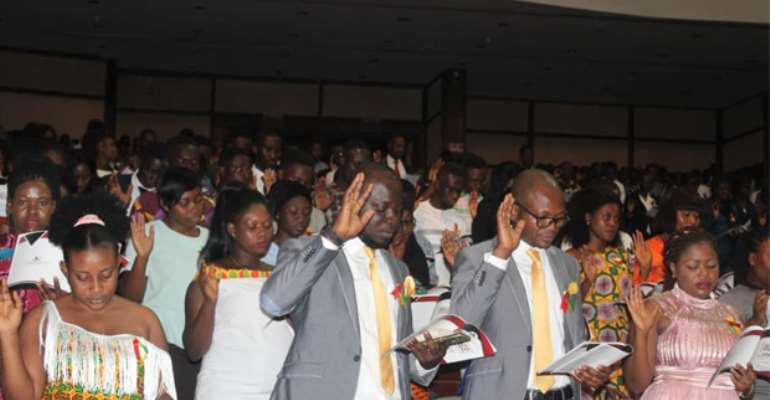 The graduates taking the induction oath

The Deputy Minister of Health, Alexander Abban, has charged the Allied Health Professional Council to crack the whip on quacks in the profession who have invaded the health delivery system, particularly in the medical laboratory and imaging.

He said the infiltration of the people are causing great harm to the unsuspecting public.

He noted that it was common knowledge that reports coming from these people are extremely dangerous to the health delivery system and society.

“The council should collaborate with health facilities Regulatory Agency (HeFRA) and the security agencies as a matter of urgency to monitor all facilities and clear all quacks from the system,” he said.

He further noted that it was important for appropriate sanctions as provided for in Health Professionals Regulatory Bodies Act (857 (2013) to be applied to institutions which continue to employ such unqualified people and thereby infringe on the law.

“They are causing harm to the public and we the Ministry of Health cannot allow that to continue,” he added.

Professor Solomon Ofori Acquah, Dean of the School of Biomedical and Allied Health Sciences, University of Ghana, in his speech as the guest speaker asked the graduates to be true to who they are both as individuals and in their professional lives.

He said in order for them to gain true professional identity they must know who they are and most importantly who they are not.

Professor Acquah said for them to be the best at their duties, they must be innovative, develop excellence and collaborate with their peers in the allied health professionals.

He said due to the importance of their work to the overall healthcare of the public they will have to sit an exam after their one year internship in various hospitals before they are given the license to be employed.