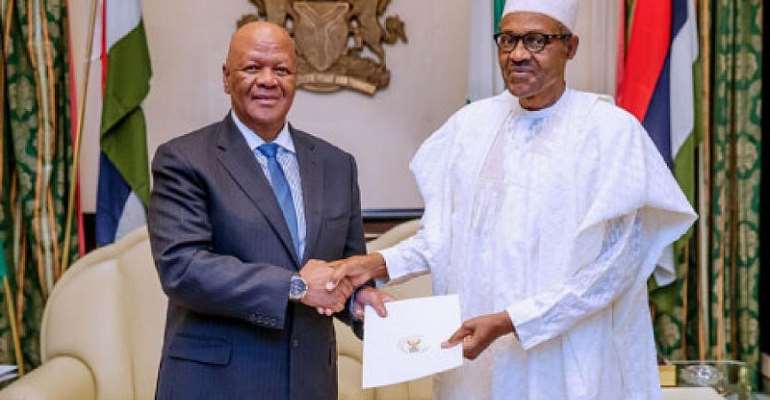 At an Abuja meeting, Buhari reminds Pretoria's envoy of Nigerian Apartheid era sacrifices that young South Africans may not remember. President Cyril Ramaphosa's letter in which he regrets the incidents was delivered to his Nigerian counterpart by South Africa's Energy Minister Jeff Radebe.

Nigeria on the frontline
It should be recalled that Nigeria was one of the foremost supporters of anti-apartheid movements, and issued more than 300 passports to  ANC leaders during the struggle for black majority rule.

No surprise, therefore, that during the meeting Buhari recalled Nigeria's sacrifices in securing democratic rule in South Africa.

“Our leadership was quite committed to the cause. We made sacrifices, which younger people of today may not know, he regretted.

The mission to Abuja was the first leg of a diplomatic shuttle that was set to take President Ramaphosa's envoy to several other countries whose citizens are affected by the xenophobic attacks.

An estimated 30,000 Nigerians live in South Africa, according to a 2016 community survey published by Statistics South Africa.

This is while experts read the presence of South Africans in Nigeria through some 130 companies registered with the Johannesburg stock exchange as doing business in Nigeria.

Issues such as South African compensation to Nigerians the restitution dominated the agenda of Monday's audience between President Buhari and the South African delegation , economists on both sides are causing for restraint

“The hostile comments made by Nigerian unions and civil society groups could result in negativity towards South-African domiciled companies”, warns Martin Davis, Managing Director of the Johannesburg-based Emerging Markets Focus at Deloitte.

Buhari-Ramaphosa summit
Pretoria is banking on President Buhari's planned visit to South Africa on October 3, to further the discussions about stitching the wounds.

Nigerian economist Bisi Ogunjobi argues that Abuja and Pretoria will be missing the point if they concentrate their action on reparations and restitution instead of building on the gains of the June 2019 South Africa-Nigeria Investment Conference.

The bi-lateral commission set up by the two countries needs to be strengthened and get citizens of the two countries made to understand each other more, the former vice-president of African Development Bank says.

Hoodlums' jobs
“Those attacking Nigerians should be made to understand that foreigners teaching in universities and medical doctors are not taking the jobs of hoodlums fighting in the streets, notes Ogunjobi who is currently Pro-Chancellor of the Samuel Adegboyega University, Ogwa, in Edo State.

He challenges the two governments to try as much as possible to reduce their levels of unemployment.

“Once there is economic growth and there are more jobs created, the room for friction is going to be reduced”, concluded Dr. Bisi Ogunjobi laureate of the prestigious award of Fellow of the Nigerian Economic Society.