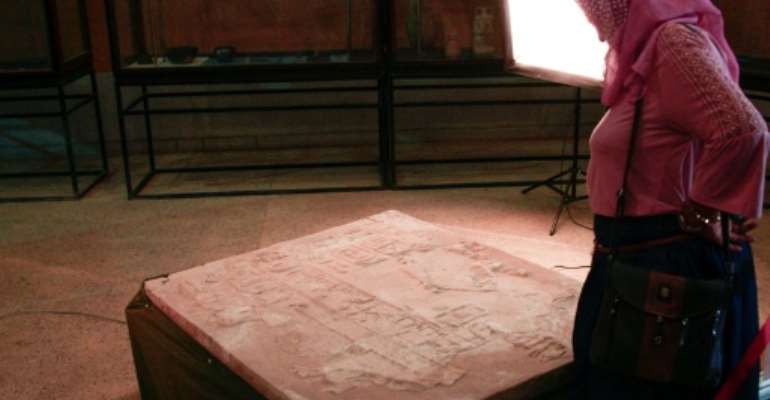 A visitor looks at a wall relief inscription, discovered at the temple of Soleb, on display at the Sudan National Museum on Thursday. By Ebrahim HAMID (AFP)

A team of French diggers has restored three Sudanese artefacts, including a 3,500-year-old wall relief, and handed them to the African country's national museum on Thursday, a French archaeologist said.

The three artefacts were discovered at separate archaeological sites in recent years in Sudan and were restored by a French team of experts.

The items are a wall painting of an ancient Kandaka Nubian queen, a Meroite stela and a wall relief inscription believed to be almost 3,500 years old.

"The idea is to give back to the museum the most important archaeological pieces discovered and restored," said Marc Maillot, director of the French archaeological unit deployed in Sudan.

The wall painting was found at El-Hassa site, the stela discovered at Sedeinga and the relief at the temple of Soleb, where French diggers along with Sudanese counterparts have conducted extensive archaeological work for several years.

On Thursday the three artefacts were handed over to the Sudan National Museum to mark the completion of 50 years of French archaeologists' presence in the country.

For decades international archaeologists have worked extensively in Sudan, proving that the northeast African nation has its own extensive wealth of ancient relics and was not merely a satellite of neighbouring Egypt.

Archaeologists are convinced that many kingdoms still lie buried, waiting to be discovered.