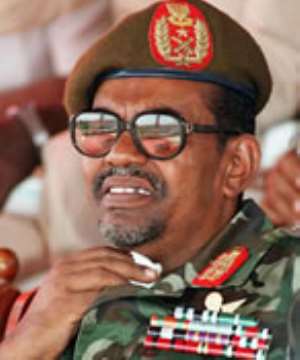 After several months of mass protests, which started in December 2018 due to bread and fuel shortages, the Sudanese finally achieved the ouster of their long-term dictator Omar Al-Bashir who has been overthrown by the army. Since 1989 his uninterrupted ruling has been marked by oppression of the black and non-Muslim population.

In July 2008 he was charged by the Hague-based International Criminal Court with genocide, crimes against humanity and war crimes committed during the Darfur war.

Sudan was on the brink of civil war between the protesters on one side and the Rapid Support Forces (RSF) on the other side. The Forces are commanded by another war crimes suspect Mohamed Hamdan Dagalo, a self-proclaimed general who never served as a soldier nor received any military education. He was granted his military rank by President Al-Bashir in return for his services in Darfur that he performed with extreme cruelty. RSF is composed of former members of the Janjaweed militias which have committed most brutal crimes and atrocities in Darfur since 2003 with at least 300,000 killed and three million civilian population displaced.

In their massacre attack in Khartoum on 3 June 2019, shortly before the agreement was achieved between the ruling military council and the opposition, RSF killed 128 peaceful demonstrators. General Dagalo has established good relations with Saudi Arabia where he is in charge of recruiting Sudanese mercenaries to fight on the side of Saudi coalition in Yemen. The Sudanese army has remained neutral in the current crisis and thus proved its professionalism.

Doubts about the capacity of transitional government

After long and many times interrupted talks and following the intervention by Ethiopian Prime Minister Abiy Ahmed Ali, the Constitutional Charter was signed between the opposition coalition and the military council on 17 August 2019. The coalition called Forces of Freedom and Change unites the Sudanese Professionals Association, the National Consensus Forces, Sudan Call and the Unionists (DUP).

The agreement should pave the way to the formation of civilian government after almost have a century of military rule. Despite great optimism among the citizens doubts are still present about the capacity of the transitional government to limit the army's and especially the RSF's influence on politics.

After the ousting of long-term President Al-Bashir an agreement was reached between the military council and the opposition on 11 April 2019. This represents a new chapter in Sudan's modern history that has already seen three civil wars: the conflicts between the northern part of Sudan and the southern Sudan region from 1955 to 1972 and from 1983 to 2005, and the ethnic cleansing in Darfur and south Kordofan from 2011 till present.

So far Sudan has avoided the Egyptian scenario

The process of transition to democracy brings along challenges such as new domestic and foreign policy, economic reforms, protection of rights and freedoms and a balanced foreign policy, all of which would enable Sudan to be removed from the international community's black list and sanctions.

The transition process necessitates fair elections and a new or modified constitution. The democratic process would trigger political and economic reforms whose consequences would especially hit the army and its interests. The recently agreed period of three years and three months would be enough for a smooth transition. The opposition coalition and the army have thus avoided the radical overnight changes as was the case in Egypt where such quick changes led to the military coup in 2013. Sudan's experience in limiting the army's role with cooperation rather than with confrontation is important for the whole Arab world and for the Arab Spring.

After tough negotiations the opposition made a very difficult decision to appoint General Dagalo, who is charged with war crimes, as the vice president of Transitional Military Council.

Pursuant the Constitutional Charter the opposition coalition and the military council agreed that the Transitional Council would be Sudan's highest body. The Council comprises 11 members (five from the army, five from the opposition coalition and one independent member). The mandate for forming the government was entrusted to an experienced economist Abdullah Hamduk, who served as Deputy Executive Secretary of the United Nations Economic Commission for Africa (UNEC) from 2011 to 2018.

Of course, not all issues have been completely resolved. Within the opposition there are still strong fractions that have reservations about the agreement, while some have not even joined the opposition coalition.

There are four factors that enabled Sudan to overcome the difficult phase of unrest and civil war with the least possible losses in comparison with the events in Egypt, Libya, Syria, Yemen, and also Algeria where it is still not clear whether the Algerian army will take complete control over the country like it did in Egypt or it will allow a democratic transition of power following Sudan's model.

Four positive factors
Four key factors contributed to the resolution of the situation in Sudan:

Firstly: The patriotic Sudanese army refused to shoot at the protesters, except for its D-unit. Despite the conflicts and mistrust among the army and the opposition coalition they continued with the negotiations to reach the agreement and to meet at least the minimum expectations of the protesters.

Secondly: Sudanese opposition is comprised of relatively strong political parties with a long tradition, political maturity and wisdom. Their activists from the civil society maintained the initial momentum, so the protests, did not devolve into anarchy and consequently the army and RSF did not quell the uprising. During the protests and negotiations the opposition coalition was patient in resolving the critical issues. They agreed to the acceptable and realistic solutions in order to resolve the severe economic and ethnic problems in the country. They did not demand that the army be excluded from the political process and agreed to share power with the army during the transitional period. Thus they avoided the mistakes made by the opposition protesters in other Arab Spring countries.

Thirdly: Probably the most important factor was that Sudanese opposition prevented the army from abusing the local and social vulnerability of minorities and tribes. Unlike during the previous civil wars in South Sudan, Darfur and elsewhere, they focused on uniting the whole nation with the aim to ensure a better future for them and for their future generations without any discrimination.

Fourthly: Most of the credit for reaching the agreement goes to the Ethiopian Prime Minister Ali and his assiduous mediation activities in the Organisation of African Unity (OAU). Both Prime Minister Ali and the OAU prevented the interference of some Arab countries such as United Arab Emirates and Saudi Arabia and their financing of the military junta to carry out a coup, as was the case in Egypt where they provided over 12 billion dollars to remove the democratically elected President Mohamed Morsi in a coup that took place on 3 July 2013.

Once the 17th fastest growing economy in the world

Sudan, which was the largest African state until the Republic of South Sudan gained independence, is now the third biggest country in Africa (following Algeria and the Democratic Republic of Congo) with a surface of 1,886,000 km2.

According to estimates from 2010 Sudan was the 17th fastest growing economy in the world. Its fast development, which was mostly based on high income from oil (despite international sanctions), was mentioned and described in The New York Times article from 2006. After the separation the Republic of Sudan lost 80% of its oil fields that remained on the territory of the Republic of South Sudan. Being a landlocked country South Sudan has to rely its oil exports on the pipelines running through Sudan's ports on the Red Sea coast. It also lacks the oil processing facilities that remained in the northern territory. In August 2012 Sudan and South Sudan signed the agreement on the transportation of South Sudan's oil through Sudan's pipelines to Port Sudan. Today Sudan produces about 250,000 barrels of oil per day. Until the secession of South Sudan in 2011 Sudan's economy depended substantially on oil exports.

Agriculture was Sudan's main source of income in the past, employing over 80% of the population and accounting for one third of the economic sector. The country has 16.9 million hectares of irrigated agricultural land. Sudan is the world's third biggest sesame producer following India and China, while cotton is its main export crop. Nile is the main source of irrigation. The country has 643 km of coastline along the Red Sea. There are still unexploited possibilities of fishery, coastal tourism and tourism in the three national parks.

The main factors preventing Sudan's economic growth in agriculture are frequent droughts and instability due to the civil war.

The new Sudanese transitional government needs international support for reforms and economic development and for rescheduling of public debt towards IMF and other international lenders.

As far as its internal policy is concerned, the new government needs inter-ethnic and inter-tribal peace and consensus. Besides Arabs which represent 54% of the 36 million population in Sudan there are 597 Arabized ethnic groups with more than 400 different languages and dialects.

Sudan's legal system is based on Islamic Sharia law. After the 2005 Naivasha peace agreement that ended the civil war between north and South Sudan, Khartoum introduced several measures to protect the non-Muslims. The use of Sharia law in Sudan does not comply with the tradition of Sudanese people and with the modern times. Sudanese Muslims are divided between Salafism and Sufism, therefore the use of Sharia law which favours the Salafis is not appropriate for Sufis and Darfurians who belong to Sufis.

Analysts believe that Sudan's foreign policy should turn away from supporting terrorism and start to cooperate closely with the international criminal court in order to achieve the lifting of international sanctions. The Sudanese army should urgently withdraw its 10,000 soldiers from Yemen. The Yemen war is illegal and illegitimate pursuant to international law and it undermines the reputation of the Sudanese army.

It Doesn't Make Sense To Spend GHC22 Billion To Pay Deposito...
4 hours ago