Most Ghanaians Cringe at the Sight of Truthfulness 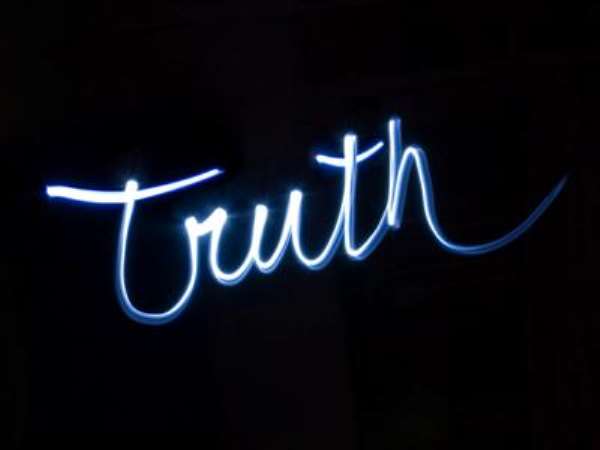 Majority of Ghanaians have come to accept lies for truth. They relish in telling lies to pave their way through to success. They accept lies for realities since lies are easy to tell and have become part and parcel of the Ghanaian way of life. Most Ghanaians will prefer to tell a lie for no good reason than to tell the hard truth for good reasons. What has become of the Ghanaian? I cannot tell.

Some Ghanaians tell and accept lies in the belief that they don't want to hurt those lying to them, or those that they are lying to. Should they express contrary opinion about what they are saying or telling, they think that will arouse animosity between the teller/narrator and the hearer.

There is the belief among the Akans that when an elderly person tells lies or does something wrong, the child or the younger person being told the lie has absolutely no right to point them out or disregard what they are being told but to swallow them hook, line, and sinker.

As the world is fast evolving where ideas carry the day and make people rich and prosperous, the Ghanaian by their culture is being asked to stagnate in their 16th Century ways of doing things where an autocratic traditional leader could easily banish one from their town or have their head chopped off or sold into slavery.

As the world has moved forward for all good and bad reasons, the Ghanaian cannot be mired in a culture that trains or indoctrinates one to accept whatever comes from their elders for facts even when they are knowingly telling complete lies to our face.

There should be brainstorming to come up with best ideas to help us move forward like our contemporary white people. If we are prevented from challenging our elders to come up with better ideas but to always take whatever is coming from the elderly as the best solution or the only sane fact, I am afraid, Ghanaians and to a larger extent Ghana, will forever remain underdeveloped, if not a derided, as a shithole country abounding in shitty liars awash in corrupt practices.

Ghanaians sadly prostrate to criminals by virtue of their riches, elevated positions in the country and to the extreme but which I find it very stupid, by their knowledge of English. To the Ghanaian, the knowledge of English is the criterion of a man's great learning. Wow!

When a president is involved in corrupt practices, embezzling State funds and assets, the Ghanaian is admonished not to react or say a word because the president must always be accorded respect by virtue of his position. Who tells the Ghanaian that they must continually kowtow to a president who is a thief and directly or indirectly helping his brother to cleverly rob the banks to enrich their family? Who tells the Ghanaian that when a president dubiously signs almost 2/3 of the country's bauxite deposit to his brother, at the expense of the collective welfare of Ghanaians, we should still laud him as a credible person to rule the nation? Are we that naive?

When a king or a president tells lies, we must be honest enough to point out their lies to them. The person may not know that they are lying to cause harm to the nation and majority of the people unless he is made aware of the reality.

We shall be stupid not to tell them but to let them think we are happy with the lies they are telling us although such lies may be costing us other great valuable things in life.

I dislike the attitude of the Ghanaian glorifying evil. The Ghanaian does not care how one earns their position or makes their money. If one steals public money to get rich and the Ghanaian is aware of the circumstances leading to the person's riches, he/she will still bow down to them. He will defend the corrupt politician to the hilt as long as the politician or the thief relates to them or comes from their area. I cannot really get my head around this Ghanaian love of worshipping criminals to our own detriment.

Kwadwo has said something. Kwame is disputing its veracity. Kwasi, Kwaku, Kofi, Yaw and Kwabena just jump in condemning and threatening the life of Kwame for challenging Kwadwo. They just don't want to know. Kwame should have accepted all that Kwadwo said, even if they were half-truths because Kwadwo is an elderly or a very important person. Does this make any sense?

Oh Ghanaians, until we change our archaic ways of thinking, our country shall never prosper to our wishful expectation but which is deceitful.

Let us call a spade a spade!

Lest I forget, this does not give us the green light to tarnish the reputation of people of integrity in the society. Genuine people must be praised and emulated.

To conclude, I call on the nation's judiciary to be honest in the discharge of their duties. They are part of problem, if not the very problem, deterring the progress of Ghana . Why cannot our judges speed up the hearing of, and ruling on, cases, brought before them but intentionally choose to delay them through unnecessary postponements giving rise to the attendant public perceptions of corruption taking place or being rife within the Ghana judicial system?

Do I have to respect one because he is a judge even if he is corrupt? No way! I will rather castigate him or her, the only way to wean them off their feed (corruption). Once they start to behave responsibly, through challenging them to get them off the corruption they are hooked onto, Ghana will start to be clothed in her decent apparel to the glory of God to make you and I proud.

No more telling of lies please. No more bowing down to corrupt persons in the society. No more judicial corruption where justice is sold to the highest bidder to deny the poor justice.

What do Ghanaians make of this quote from Mark Twain? He said, "If you tell truth you don’t have to remember anything" (as a rule of thumb, lying takes more brainpower than telling the truth).