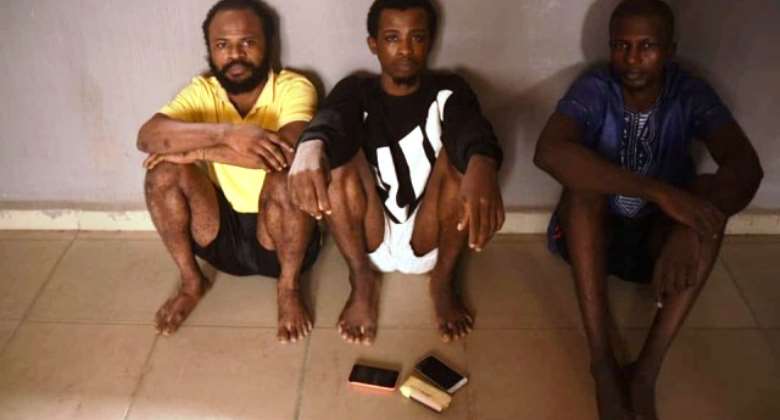 Killers of Christopher Agorua in Oguta

Imo State Police Command Tuesday, paraded three persons suspected to have a hand in the gruesome murder of one Hon. Christopher Agorua in Egwe, Oguta Local Government Area of Imo State in March, 2019.

According to him, “on the 11th of March, 2019, the Imo State Police command received a report of robbery and assassination of one Hon. Christopher Agorua in Egwe, Oguta Local Government Area of Imo State. Some hoodlums, numbering three, entered the house of the deceased, robbed them of their valuables like phones, laptop and abducted the same Hon. Christopher Agorua. They took him out and about two poles away from his house, they assassinated him. Following the report, Commissioner of Police, Rabiu Ladodo ordered investigation into the matter. Through painstaking and discreet investigation, the phones of the deceased were traced to Hassan Kabiru. When he was arrested, he said one Chimezie gave him the phone and when Chimezie was arrested, he said the phone was given to him by Solomon Onyemaechi. That necessitated their arrest and investigation continued. The arrested suspects will be charged for robbery and murder.”

Similarly, the Police paraded about thirteen suspected cultists, arrested on their way from an initiation.

“We intercepted an 18-seater bus. Upon reasonable suspicion, the stop-and-search team of the Police decided to search them. It was discovered that they are members of the Black Axe confraternity. A locally made Pistol, wraps of Indian Hemp and Live ammunitions were recovered from them.”

Speaking to newsmen, leader of the group, Nkwocha Chinaza explained that they had initiated thirteen new members same day. He further stated that they were students of Imo State University, Owerri and Alvan Ikoku College of Education, respectively.

In another development, the Police paraded a ‘Prophet’ and other suspected killers of one Princewill Ezeji in Imo State.

“On the 3rd of August, 2019, the Imo State Police command received an information on a missing person, one Princewill Obinna Ezeji and the Commissioner of Police detailed officers and men to unravel the mystery behind the sudden disappearance of the victim. Following a thorough and painstaking investigation, it was discovered that the said Princewill bought a Toyota Camry car and went to his Prophet with the sum of Ten Thousand Naira and some drinks, to show him the car and ask for his blessings , in appreciation of God’s favour. Unfortunately, that was the end of his life.”

“Upon investigation, it was discovered that the prophet killed the man and took the vehicle. The phones belonging to the victim have also been recovered. Upon interrogation, he took us to the place he was buried and the remains, in carcass were recovered.”

Addressing newsmen earlier in his office, Tuesday evening, Imo State Commissioner of Police, Rabiu Ladodo assured people of the state of the commitment of the police in the state to ensure security of lives and property.

He assured residents of Oguta Local Government Area and the State at large, of adequate security, urging people of the area to go about their normal businesses without fear of harassment.

Ya-Na commiserates with Mahama
29 minutes ago