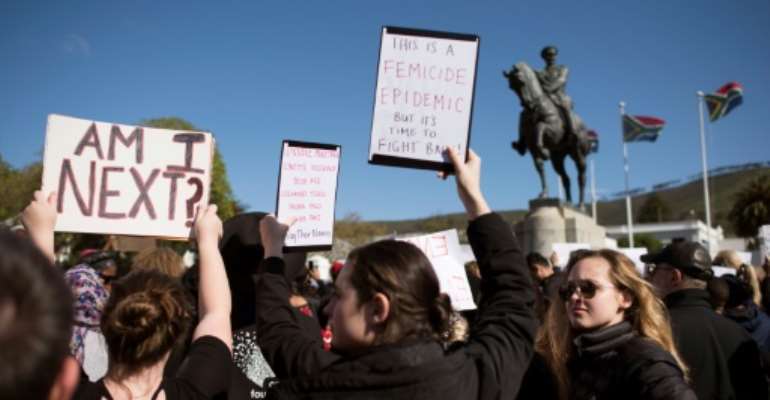 Women in South Africa have been marching under the hash tag #AmINext. By RODGER BOSCH (AFP)

Broken, cream-coloured tiles form a mosaic of a woman's face in the entrance hall of a South African shelter for abused women. Branches extending from her head are painted across the wall, decorated with colourful leaves.

"The face represents the broken women who arrive" here, says the director of the Saartjie Baartman Centre For Women and Children, Bernadine Bachar.

"The branches show the healing, growth and final empowerment they experience through the programmes we offer."

The centre in Athlone, on the outskirts of Cape Town, is a 24-hour safe house for women and children who have been victims of abuse.

The shelter can take up to 120 women at a time with their children -- and they are usually at full capacity.

South Africa has been hit by protests against femicide over the past few weeks after a series of murders that shocked the public.

Among them was a student from Cape Town who was raped and killed in a post office.

More than 30 women in South Africa were killed by their partners last month. By Rajesh JANTILAL (AFP)

Women's Minister Maite Nkoana-Mashabane said that more than 30 women were killed by their spouses last month.

The hash tag #AmINext has been trending, with protesters demanding immediate action from the government.

Some of them have called for the return of the death penalty and for a state of emergency to be declared.

President Cyril Ramaphosa announced an emergency plan to stop the resurgence in violence against women on Wednesday.

During an emergency sitting in the National Assembly, he said South Africa was one of "the most unsafe places in the world to be a woman".

The Western Cape Women's Shelter Movement (WCWSM) protested outside parliament during the talks, demanding it consider the significant role played by safe houses for women and children.

"We've absolutely seen an increase in gender-based violence over the past three months," she says.

President Cyril Ramaphosa says South Africa is one of the unsafest places in the world to be a woman. By TONY KARUMBA (AFP)

"Not only has the number of women (affected) increased but they're suffering from more intensive injuries than they used to before."

According to Bachar, they are seeing a lot more burn victims, particularly from boiling water thrown at the face, and an increase in stab victims.

She blames this on a lack of government intervention, high levels of substance abuse and an unprecedented increase in unemployment rates that result in "a lack of power and control which drives gender based violence".

Bachar also accuses the police of not taking the victims seriously and says they need to undergo special training to equip them with the necessary skills to deal with cases of sexist violence.

Police have been criticised for not taking victims seriously. By Rajesh JANTILAL (AFP)

"I went to the police, and I was dripping with blood, but they still wouldn't help me. They said they don't get involved in 'house issues'," Petersen says.

The 44-year-old, who currently lives and works at the abused women centre, blames a lack of education and awareness for the problem.

"I was always taught by my grandmother that as a wife it is my job to be submissive. Before I came to this centre I didn't even know what abuse meant," she said.

The centre receives funding from the Department of Social Development -- but Bachar says that only covers 40 percent of the annual cost of running the shelter.

"Increased funding would mean we could uniformly extend our services to more survivors."