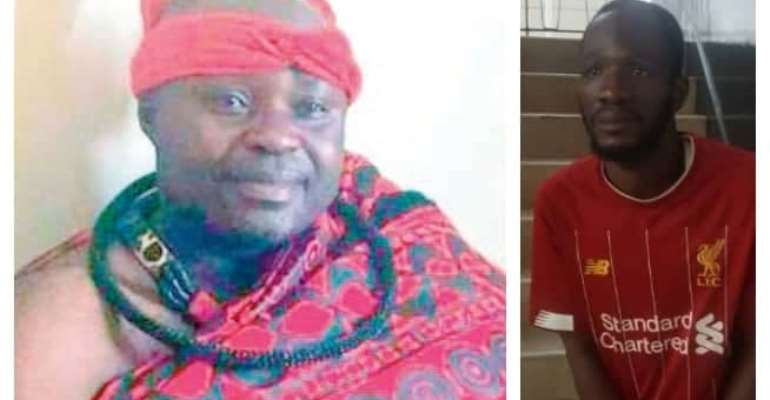 Police have arrested the prime suspect in the murder of Nana Kwadwo Afodour, the Asamponhene of Asantehene Otumfuo Osei Tutu II.

The late traditional leader, who lived in Kumasi, was surprisingly found dead in his vehicle on the Ejura-Nkoranza road in the Ashanti Region on Sunday evening.

He had been stabbed multiple times at the back of his neck, his chest and other areas on his body, thereby heightening suspicion that he was murdered.

The Police confirmed the arrest of Sadat in a press statement forwarded exclusively to hotfmGhana.com

Below is the full statement
"The Ashanti Regional Police command confirms the arrest and detention of suspect Anumwar Sadat Mohammed alias “Alhaji” the prime suspect in the murder of Nana Kwadwo Afoduor , Otumfuo’s Asamponhene at the outskirt of Ebuom near Atebubu on 18th August, 2019.

Suspect Sadat Mohammed was arrested in Ouagadougou, Burkina Faso on Monday 16th September 2019 through a collaborative effort of the Ashanti and Upper East Regional Police Command, the Ghana Embassy in Burkina Faso and the Interpol Ghana and Burkina Faso.

He is in currently in custody assisting in investigations. Suspect had fled the country to neighbouring Burkina Faso to settle with the family but luck, however, eluded him and was arrested.

Meanwhile his wife the Queen mother of Pakyi No.1 has been evacuated with their children to Kumasi and assisting the Command in investigations.

The Command would also use this medium to thank members of the general public who volunteered with information, especially the driver and passengers on board a Ghanaian bound bus in Burkina Faso for their assistance in apprehending the said suspect.

The Public will be updated on further development in the case.

Ejisu: 21-year-old girl murdered with intestines gushed out ...
19 minutes ago