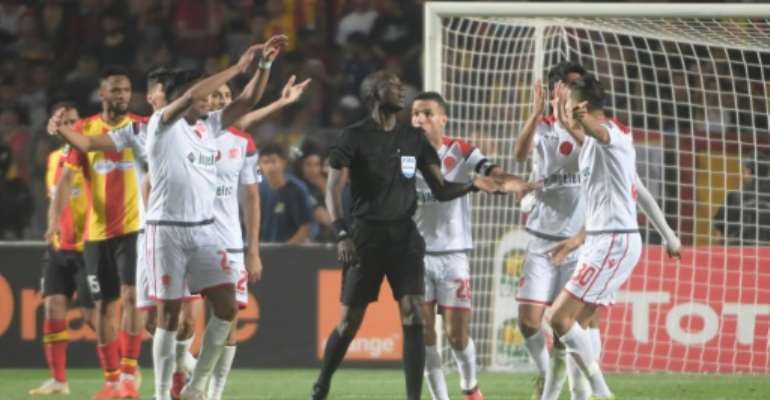 Wydad's player stormed off during their CAF Champions League final against Esperance. By FETHI BELAID (AFP/File)

Moroccan club Wydad Casablanca have lodged a new appeal with the Court of Arbitration for Sport (CAS) over the decision to declare Esperance the winners of their CAF Champions League final last season.

"The procedure remained open, it is a natural appeal," a Wydad spokesperson told AFP on Wednesday.

The latest move by Wydad is challenging the decision by the Confederation of African Football (CAF) commission last month to award Tunisian side Esperance the title.

Wydad's players stormed off an hour into the return leg in Tunis on May 31 after a VAR malfunction meant a disallowed equaliser could not be reviewed.

CAF had called for the second leg to be replayed at a neutral venue, but that decision was later overruled by CAS.

After a 1-1 first-leg draw in Morocco, Esperance were leading the return game 1-0 when the Wydad players left the field.

The fiasco prompted CAF to reduce both the Champions League and Confederation Cup finals from two legs to one match at a neutral venue from this season.