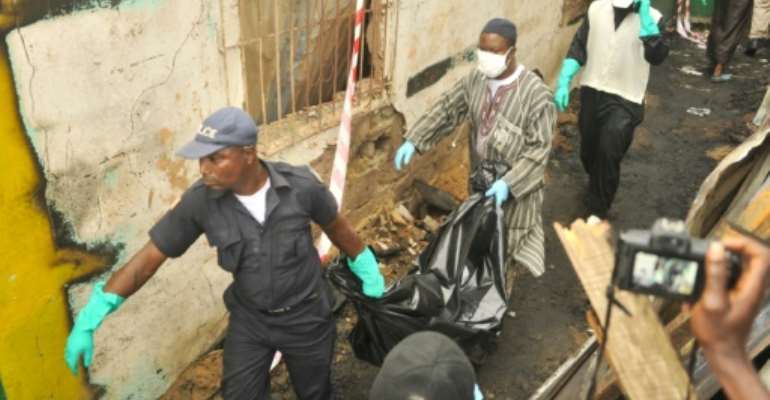 At least 26 children and two teachers died in the blaze overnight, the president's office said. By Zoom DOSSO (AFP)

A huge fire at a Liberian Koranic school killed at least 26 pupils and two teachers on Wednesday when flames engulfed their dormitory, in one of the worst disasters of its kind for the West African nation.

The boys were sleeping at the school when the overnight fire began, said police spokesman Moses Carter, adding that an electrical fault could have caused the blaze.

The victims' bodies are prepared for burial. By Carielle DOE (AFP)

President George Weah visited the site in Paynesville, on the outskirts of the capital Monrovia, and said the cause was still unknown.

"We are here to encourage parents of the victims to have strength, because it is painful to lose your kids in this manner," Weah told reporters at the scene.

The president's office said 26 pupils between the ages of 10 and 20 died along with two teachers. The police spokesman said 27 students had been killed.

On Wednesday evening, the president of neighbouring Guinea, Alpha Conde, said several of his country's nationals died in the blaze.

In a statement he expressed "great emotion" over the deaths and gave his "deepest condolences to the Liberian people and the Guinean community in Liberia" adding that he was following the investigation closely.

"We extend our sympathy to the bereaved families. We don't know the cause of the fire yet, but we will encourage our investigators to find how it happened," he added.

Rescuers in white masks and surgical gloves carried the children's bodies in bags from the burnt-out building as crowds of people and relatives pressed together outside.

"Our team is investigating the cause of the fire," the police spokesman said. "It may be electrical," he added, while refusing to rule out the possibility that the fire was a criminal act.

The children were asleep

"I was sleeping when I heard noise outside. My wife opened the back door and we saw smoke coming from the front. We came out and saw fire at the back," said local resident Zazay Ballah, who said they had helped in the rescue efforts.

"We went for water, trying to put it out... When the fire fighters came, the fire was already going down."

The victims were buried swiftly in a collective ceremony, in the Muslim tradition.

The crowd outside the United Dawah Ummah High School. By Carielle DOE (AFP)

In an earlier tweet, Weah offered condolences to the families of those affected.

"My prayers go out to the families of the children that died last night in Paynesville City as a result of a deadly fire that engulfed their school building," he wrote.

"This is a tough time for the families of the victims and all of Liberia."

The Liberian authorities are all too familiar with deadly fires, often caused by malfunctioning generators, though "not on this scale," the presidential spokesman said.

The majority of Liberians are Christian but there is a sizeable minority of Muslims among the 4.5 million population.

Liberia is one of the least developed nations in the world, and its recent history has been blighted by civil wars and the deadly Ebola virus.